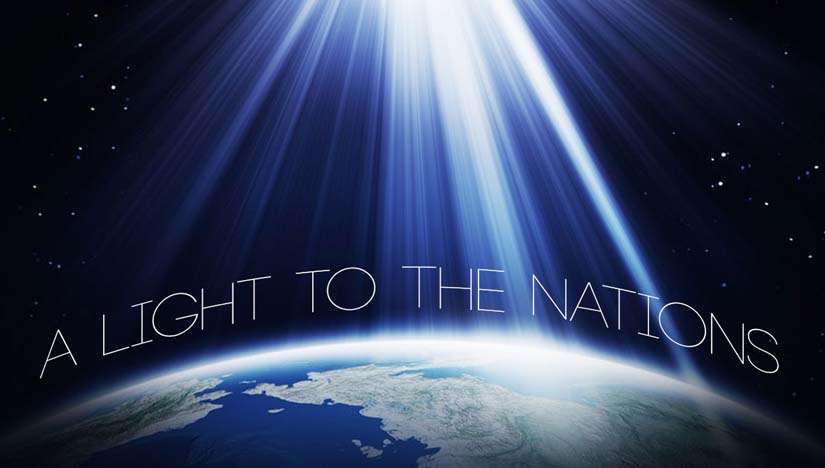 Today’s reading follow closely on last week, with another ‘Servant Song’ from Isaiah, and John’s Gospel describing events right after the Baptism of Christ. It is also World Peace Sunday, and St Paul reminds us that ‘grace and peace’ come to us from God.

Isaiah 49:3, 5-6
This is the second passage in Isaiah which biblical scholars have called ‘The Servant Songs’, although the text of this prophetic book does not connect them. All four ‘songs’ speak of one who has a special role to play to bring about God’s salvation of the world. The full text of this one is longer than our selection, and runs from 49:1-9. Much of what is said about the servant in all four ‘songs’ has been taken by Christians as a prophecy or foreshadowing Christ. Among lines that fit this are ‘formed from the womb’, a saviour, ‘the light of the nations,’ and a salvation meant for both Israel and all on earth. All of these will find numerous echoes in the gospels speaking about Jesus and in his own words, such as ‘I am the light of the world.’

The identifying of the Servant as Israel in the first words we hear is puzzling because later we hear that his mission is to Israel. There is an interpretation of this paradox, which I have been reading in the study of N. T. Wright (in Paul and the Faithfulness of God.) In the period of the Second Temple, theology had to deal with the disappointment that followed the release of the Babylonian captivity, when all the glorious hopes for renewed period of ‘glory’ with the re-building of the city and its temple faded as the work went slowly and with many difficulties. This was followed by a period when the country was subject to foreign conquest, first by the Greeks after Alexander, and then by the Roman empire. How was God’s faithfulness to his original promise to the chosen people going to work out? was a question needing an answer. First of all, Israel had to hold fast to the Torah and live righteously. And then she would become ‘a light to the nations’, and would be part of the redeeming of the rest of the world. At the time of the birth of Jesus, there were many waiting and working for this, some expecting a ‘Messiah’ from the line of David who would accomplish this. As Paul understands this, Jesus takes this role of ‘Israel’, assuming as a human the identification going back to Abraham. (See the opening of Matthew’s gospel of the ‘genealogy’ of Jesus.) Israel had been called ‘son’ by God, but in a far deeper way, Jesus is the only-begotten son, crowned also as King. (Psalm 110/111 among other texts emphasises this.)

John L. McKenzie in his book Second Isaiah also suggests an interpretation based on the prophetic words to Israel in the past which will now find a new and wider mission as ‘light to the nations.’ He concludes: ‘The fullness of Israel and the fullness of the nations both lie beyond the historical present, and it is to this fullness that the Servant’s mission must look.’

Psalm 39/40: 2, 4, 7-10
This psalm could be seen as having aspects of the Servant, beginning with a time when the psalmist felt persecuted and in need as described in verse 49:4 which was omitted in the liturgy reading. It also has section which has been translated differently in English versions, partly for some textual difficulties in the manuscripts. Although that may feel frustrating if we want the ‘right’ meaning, the variations can also be seen as offering a richness for our prayer life. One such line is the ‘open ear’ – which in the mass reading is something God asks for, in other translations, God opens the psalmist’s ear (that is, helps a deeper understanding). A variant in the Greek text leads to ‘prepare a body for me’, which the writer of the book of Hebrews 10:5-7 uses to apply the text to Jesus. For Robert Alter the ‘scroll of the book’ was written for the palmist, in other translations he finds the words in the book to describe his dedication to God’s will. The types of sacrifice mentioned were various rites of the Torah (see Leviticus). This re-visiting of the meaning of sacrifice is also found in the prophets Isaiah and Micah: what God wants is not external sacrificial gestures, but a ‘humble and contrite heart’, one who seeks to do God’s will in practice.

I Corinthians 1:1-3
Selections from this Letter will be read in following Sundays and we start with the opening greeting. It was the practice of St Paul to found a community, make sure they have good leaders, then move on to a different place to reach more people with the gospel message. But he continued to be concerned for the ones he left, and they sought his guidance when difficulties arose. His comments and instructions were specific to their situation, but many of them have universal value for Christian living and so they form part of our scriptural heritage. This selection is a typical opening for Paul, taking the usual letter style of that time but adjusting it to his purposes. Letters at that time started with the writer’s name; Paul adds his authority as an Apostle. His greeting uses Jewish ‘peace’ and subtly changes the format from ‘greeting’ (chairein) to ‘grace’(charis). ‘Called to be saints’ – because they are now part of God’s chosen family and that should be central in their lives. While addressing a local group, he reminds them they are part of larger church.

John 1:29-34
Last week, Matthew’s reading reported Jesus baptism and the words from heaven. John’s gospel does not describe that moment, but he writes about what happened shortly after that. He had said just before our selection that the religious authorities in Jerusalem sent messengers to ask John why he is preaching and baptising. John denies being the Messiah, and quotes the words of Isaiah: ‘I am the voice of one crying in the desert, make the Lord’s road straight.’

The next day John sees Jesus approaching and speaks about him to the people who had come to hear John. Naming Jesus as the ‘Lamb of God’ occurs in the gospels only in John. (It has, of course, been taken into our mass.) There is much discussion of the meaning of ‘lamb’ in this context. Some relate it to the fourth Servant Song in Isaiah, which uses the words ‘lamb’ and ‘sheep’ to describe how the servant was led to his death without making any opposition (Isaiah 53:7). There is also the lamb of the Passover, whose blood saved the first-born of the Hebrews although this is a little different from ‘taking away sins’ (Exodus 11ff). Lambs could also be sacrificed in the Temple liturgy. The Greek word translated ‘take away’ has a wide range of meanings: to bear or take on oneself, to take up and carry away, to remove, to destroy. We can think of all these aspects as ways to help understand the mystery of Christ’s redemption.

Jesus as existing with God before his birth is spelled out by John’s gospel poetically in the opening words, and here it is put on the lips of the Baptiser. The descent of the Spirit like a dove is told in all four gospels, but this is the only one where John says he was told to watch for the one to whom it will happen. The words coming from heaven about Jesus, found in the other three gospels, are not described and here it is the Baptist himself who witnesses that Jesus is the ‘Chosen One of God’.

The liturgy will now move on from this inaugural moment of Jesus’ ministry, as both John and Matthew show him moving to Galilee where his own ministry will begin.

Note: We hear a lot at masses during the year from St Paul’s letters, but miss an overview of his mission and theology. For this there are various sources. N. T. Wright’s Paul and the Faithfulness of God is an important study covering history, background and interpretation but at 1700 pages is not for the average reader. A good short introduction is Rowan Williams’ Meeting God in Paul.