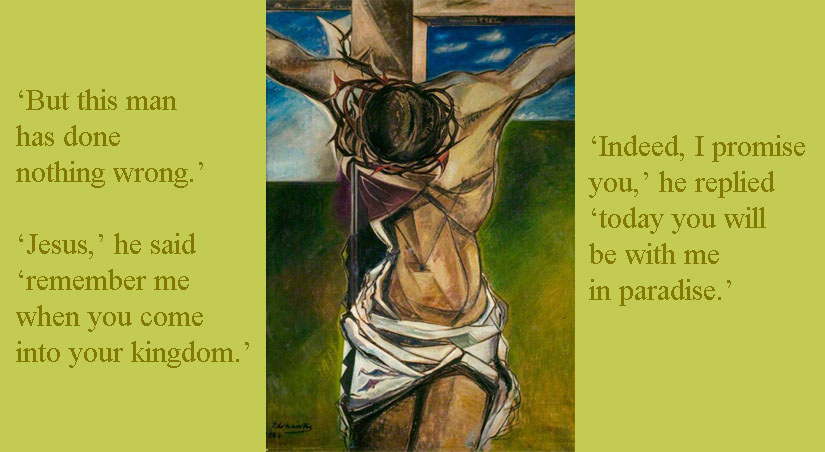 The liturgy offers a number of ways to reflect on the meaning of today’s feast. There is a striking difference in tone between the three readings, one a flat historical account, next a poetic, almost ecstatic picture of Christ as the centre of the cosmos, and then a poignant promise of Jesus as he is dying on the cross.

2 Samuel 5:1-3
The reading passes over much of the complex situation in which David became the King. At the point when the selection begins, he was ruling over Judah, the southern of the two kingdoms into which the country divided. Leaders from Israel, the northern section, have come to him at Hebron, his capital before the government and centre of religious worship was moved to Jerusalem. They use the title ‘Shepherd’, which was David’s youthful occupation (See 1 Samuel 16) and became an ideal picture of the Older Testament of how caring a ruler should be.

A reason for this text on the kingship of Christ is that the prophet Nathan had told David his royal line would never die out (2 Samuel 7:1-7). But the Jewish kingdom came to an end when conquered by Babylon and later by Rome. Then promise of David’s lasting line was re-interpreted and became a ‘messianic hope’ that the earthly kingdom would someday be restored with a new kingly ‘Son of David’. Jesus was seen in the New Testament as the heir to that promise. At the time of Jesus, many Jews expected this hoped-for Messiah would restore their independent nation and free them from Roman rule. Jesus had to insist that he was bringing a totally different kind of ‘Kingdom of God’, and that was hard for some of his listeners to accept – and even now the concept of a non-worldly king can be hard to understand fully.

Psalm 121/122:1-5
The psalm is one sung by pilgrims coming to Jerusalem to worship in the Temple built by Solomon, David’s son. Since it also served as the political capital, the ‘thrones’ and ‘judgment’ pick up that theme, but suggest a new beginning.

Colossians 1:12-30
The letter opens with thanksgiving to God the Father making a place for us in his kingdom of his Son. The next part is set in Hebraic poetic form and may be quoting an early hymn. It centres on one aspect of today’s feast by stressing the ‘universal’ – or ‘cosmic’ – nature of Christ’s dominion. It starts with the present, stressing that we are called to a place in God’s Kingdom through forgiveness. It then moves outside time into eternity, showing Christ as central to the whole of creation. The hymn draws on the language and imagery of the Jewish Wisdom literature, especially Wisdom’s role in creation in Proverbs 8:22ff.

‘Thrones, Dominations, Sovereignties, Powers’ – these words represent beliefs at that time in angelic or spiritual intermediaries controlling the world under a greater God. Since the author of this Letter has warned his listeners against excessive reliance on such intermediary spirits rather than putting their trust in Jesus, the hymn stresses that any such spirits were subordinate to Christ from the beginning before time. The hymn then moves back to us and our times, with the belief in the Church as the ‘Body of Christ’. As Jesus was the beginning of creation, in his human life he is the first born of the Resurrection, with the solemn reminder this was achieved by his reconciling death on the cross. That leads to the Gospel.

Luke 23:35-43
When our selection opens, Jesus has already been raised up on the cross, and Luke is describing the reactions of people watching him. The ‘leaders’ are the Jewish authorities who had asked Pilate for his death. That he is being so rejected rather than acclaimed as a king, in their judgment proves that he cannot be the Messiah/Christ of God, nor ‘the Chosen One’. This second title appears only in Luke who used this once before in the words from heaven heard at Jesus’ Transfiguration on the mountaintop (9:35) where it is combined with ‘This is my Son’. The ‘chosen’ title comes from Isaiah 42:1 and while the Jewish leaders are sarcastic in using it to taunt him, it also is for Luke pointing to the truth about Jesus. The Roman soldiers join in the mockery, not for its religious meaning but the political, as for them the Roman Caesar was the real king, and Judea a conquered, petty part of the world. This is behind the point of the words written over the cross – they are meant as a mockery.

Thus the irony or paradox for Luke and for his readers is that all these titles – used sarcastically by Jesus’ enemies – are really true. Although Jesus appears powerless, defeated, and dying, it is through his freely offered death that he becomes the victorious Messiah and King. This is a kingship that owes nothing to politics, conquest or human endeavour – it is a totally a gift of God. And no matter how much that can be explained, there remains a depth of mystery in how this comes about.

Only Luke’s gospel has the account of one of the criminals also being crucified protesting in favour of Christ. He recognises that Jesus is innocent of any crime deserving death, and also acknowledges his own sinfulness and repents of his past. His understanding of Jesus takes another step – an astonishing act of faith when we realise that he is looking at the physically helpless, battered and bleeding body nailed on the cross next to him. The thief understands somehow that not only is Jesus innocent, he is actually what the mockers have said and truly the one who brings the Kingdom of God. In a prayer of total simplicity and humility, he asks only to be ‘remembered’ and trusts the rest to Jesus. That personal name, ‘Jesus’, means ‘Saviour’ an identity Luke has noted from the first part of the gospel, so that the thief may also recognise what Jesus does in his death and resurrection.

Jesus’ promise steps out of time into the eternal ‘Today’. While both the thief and Jesus himself will go through more suffering and both will die on their crosses, with the solemn word ‘Amen’ Jesus states that they will then go together into his everlasting Kingdom. ‘Paradise’ was a word borrowed from the Persian, first used for the condition of the Garden of Eden in its innocent and unified state, and then later as the ‘ideal’, or everlasting and perfected, world. We are given no further hint of what this ‘today’ consists of, but today’s readings remind us it is something for which we are also destined.

This is our last selection from Luke in Year C and can be seen as a summary of this Gospel’s emphasis on faith, forgiveness and prayer, showing us Jesus as the one in whom we are saved and given everlasting life in the Kingdom of God.