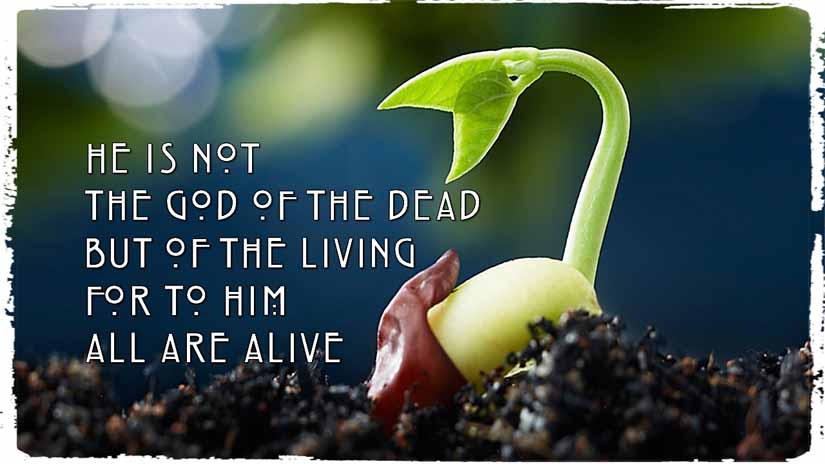 Our readings today are on resurrection, with some of the strongest statements about the after-life before the time of Christ. Jesus in the gospel is challenged to explain that resurrection will differ from life on earth and explains that God’s love seeks communion and closeness with all, and love cannot be ended by death.

2 Maccabees 7:1-2, 9-14
The two books of Maccabees, written after most of the Hebrew Bible, are among those not accepted into the Jewish and Protestant canons. The Catholic Church has found riches in them, first for the history of the time shortly before Jesus, a period of which we would otherwise know little. Secondly, the books are valuable for understanding the development of beliefs from Judaism to Christianity. One example is that they contain some of the strongest affirmations of the resurrection of the dead and praying for those who have died and thus the background for what we call Purgatory. Earlier books of the Bible were vague about the after-life and often expressed the hope that the good would be rewarded in this life. But as time went on, people saw that good people suffer unjustly and perish before a rescue, a deeper hope and sense of how God rewards the faithful began to develop. It is the expressed belief in resurrection that made this reading chosen for today’s gospel.

I see this short excerpt as a ‘teaser’ to read the whole story, beginning with 6:1-11 which describes the persecution of Jews by the Seleucid kings who had conquered much of the area of the Middle East. The section of 7:1-42 tells a mother and her seven sons who refuse to break the Jewish law, and all are put to death. Today’s selection omits the details of their torture which are similar to the war crimes we find in contemporary news accounts. Our reading has shortened the responses of all seven and the attempted bribery of the last that he would be rewarded handsomely if he gave in. The story of the mother is not included in our reading, but I find it especially moving. She wanted her sons to remain true to their faith, but to watch all her children tortured and killed must have been great emotional suffering. She herself was killed last of all.

We live in a new age of martyrs and stories of torture and death are too common in our news accounts. But the emphasis in the liturgy is on hope, with the firm belief that the dead still live in and with God. And that hope is what we can also draw on when we hear about contemporary events.

Psalm 16/17:1, 5-6, 8, 15
The psalm fits well after the Maccabean story, beginning with a prayer for justice, followed by a firm commitment to stand fast, and ending with a prayer of trust in God’s care.

2 Thessalonians 2:16-3:5
A similar confidence in God’s care in preserving the faithful and in giving us comfort and hope in any troubles of our times comes from our second selection from this book. The writer is also concerned for the spread of God’s message, also in our time an emphasis of Pope Francis. An echo of the martyr theme is in the prayers against ‘interference of bigoted and evil people’.

Luke 20:27-38
When Jesus arrives in Jerusalem, the gospels show him meeting hostile questions from the authorities in the Holy City, debating most often with Pharisees. In this selection, we meet the Sadducees for the only time in Luke. They were associated with the priestly caste, those permitted to serve in the Temple, their name probably comes from Zadok the priest of Solomon’s temple. They were an elite upper class, religiously conservative, acknowledging only the first five books of the Old Testament (the Torah or Pentateuch). Since the resurrection from death is not mentioned in these books, they rejected it. This put them at odds with the Pharisees. In this dialogue, the Sadducees have realised that Jesus would take the position of the Pharisees on the after-life and they try to show him in the wrong about that.

Their questioning is not honest: they are not asking for information, but trying to trap him with a contrived objection that they consider shows up the fallacies of believing in resurrection. The background to their story is ‘levirate marriage’ from the word levi meaning brother-in-law. This was a practice, widespread in the Middle East, of requiring a male relative of a man who has died to father a child with the widow. This child would be considered the heir of her dead husband, something that mattered a lot in that culture. It also gave a widow both position in that society and some means of being cared for. For the Jewish Law on this, see Deuteronomy 25:5-6.

Jesus does not accept their case, although neither confirming nor rejecting levirate marriage. (Some scholars doubt it was still practiced in his time.) Instead, he gives a teaching on how eternal life differs from life on earth. Heaven will have no need for human reproduction. Since the Torah was the only books the Sadducees accepted, Jesus shrewdly argues from that rather than other Old Testament writers with more specific hope of resurrection.

‘At the bush’ – this sort of description was the way at that time to identify a passage of scripture. We now use the system of numbering chapters and verses which makes it more precise and can say that the story of God speaking to Moses out of a burning bush is found in Exodus 3:1-6.

Jesus argument is in the style of the rabbis and moderns may not follow the method of ‘proof’ it contains, but it was convincing to the listeners. Luke concludes the series of controversy stories by saying that after Jesus’ answer to the Sadducees, his opponents saw that they could not win against him by questions and arguments.

Even if we miss the force of this argument from the Torah, the affirmation of ‘the God of the living’ does give us a sense of eternal life. G. B. Caird writes: ‘Jesus is saying, in effect: all life, here and hereafter, consists in friendship with God, and nothing less is worthy of the name of life. Abraham was the friend of God, and it is incredible that such friendship should be severed by death. Death may put an end to physical existence, but not a relationship that is by nature eternal.’

At a time of the year when the churches pray for our beloved dead, these words have a message of comfort and hope. ‘Love is stronger than death.’ (Song of Songs 8:6)