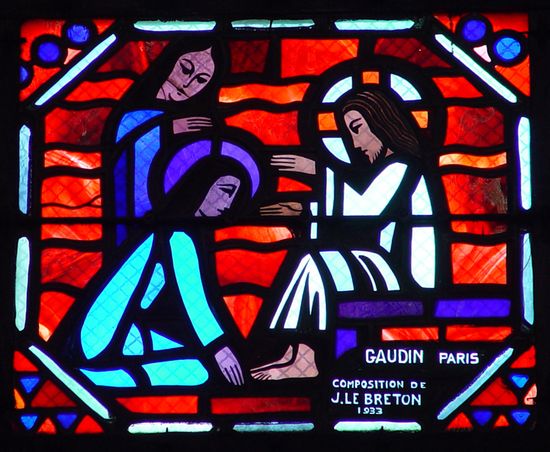 The climax of today’s readings is ‘choosing the better part’ and leads to a reflection on what that means and what choice we make.

Genesis 18:1-10
The liturgy has taken this story of hospitality as background for the gospel selection. Welcoming strangers was a virtue much prized in the ancient Mideast and also mentioned by St Paul in his letters in urging us to care for others. In harsh desert land, assisting travellers is still practiced today among nomads.  In this story, however, Abraham goes beyond offering necessary food and drink – his provisions are suitable for a feast.

In the hottest time of the day, Abraham is sitting in the shade of his tent when he sees three figures approaching through the shimmering heat and assumes they will need some help. This text may be combining several old traditions, as there is some confusion in places between God and the three ‘persons’. The three may be like angels who sometimes in Bible stories are ‘messengers’ of God taking a human appearance. Here we are alerted before the story starts that the visitor is God by the use of the sacred name we translate as ‘Lord’.  Abraham opens the conversation with ‘My lord’ but this is a different word in the Hebrew used as an honorific title rather than recognising the visitors as God. It is not clear in the reading at which point he does know they are more than human, possibly not until after the prediction of his son’s birth.

To understand the impact of ‘your wife will have a son’, one needs to know that Sarah was post-menopausal and without God’s intervention could not have conceived a child. This is made clear in the verses following our selection when Sarah overhears the prediction and laughs, sure it is impossible for her to be pregnant. This promised son is Isaac (a name related to her word ‘laughter’) and his son is Jacob-Israel. From these ‘Patriarchs’, the Hebrews will trace their identity. They are ancestors of Jesus and therefore one of the ways Christians see our connection to God’s original people.  Christians have also seen the three God-like visitors as a fore-shadowing of the Trinity, as in the popular icon of Rublev showing them at the table Abraham has prepared.

(Robert Alter discusses the historical details of this passage in The Five Books of Moses.)

Psalm 14/15:2-5
This psalm may have been used when going up to the Temple (‘your holy mountain’) to worship. It has a short summary of the Law on dealing with others: one cannot worship God faithfully while acting unjustly or cruelly to the people met with daily. Although Abraham lived before the Law and the Temple, he is shown acting with righteousness.

Colossians 1:24-28
The writer of this Letter continues to stress that it is through Christ that we have our revelation, in contrast to the mistaken belief at Colossae that there were other, perhaps angelic, sources giving them ‘knowledge’.  The reading opens with the idea of ‘making up what was lacking’ or ‘still to be done’ for the sake of the church as the body of Christ. It does not mean that St Paul thinks Christ’s self-offering through his death and resurrection is not enough, for he stressed in the passage we heard last week, ‘that all things are reconciled’ through Jesus.  The Greek text here uses a word for ‘sufferings’ or ‘hardships’ that is never used for the passion of Jesus, but often for what the disciples and ministers will encounter in living as Christians.  It is this form of suffering that Paul has found in his preaching and teaching, but is happy for that as he sees it as something he can offer for the Colossians. The idea that we can ‘offer up’ our pains, problems and hardships for others has become a familiar spirituality for Catholics. It is a reminder that God is with us and we are with God in everything we do. Further, that everything we do also relates to other people. Our problems and sufferings are no exception.

Luke 10:38-42
This short selection is only in Luke. With a brief line to remind us of the setting of Jesus’ journey to Jerusalem, Luke plunges in a bare-bones account, with no extra details of the place or people. Martha who offers the hospitality may be the older sister who takes charge of their household arrangements. Like many a hostess – and indeed like Abraham – she wants to provide something special for this distinguished guest, but has tried to prepare more than she can manage. She is annoyed with her sister for not ‘doing her part’ in the effort and asks Jesus to order her to help. His reply is gentle but firm, and saying her name twice suggests compassion.

The Greek text is a little awkward here, and literally can be translated ‘a few things or one’ and the English bibles vary in their choice, some have ‘only a few things’ and others ‘only one’.  I can see the Greek version as Jesus making two points: first it is not necessary to prepare so many dishes, they need only the basic ones, but also going on to the next emphasis: choosing the most important thing to do in the presence of Jesus.  That is to become a disciple and listen to what he says. Jesus’ reply carries a similar message to the words he used to reject Satan’s temptation, ‘People do not live by bread alone’. (Luke 4:4)

There is another point:  Martha asks Jesus to intervene between her and her sister, and he does not give such orders. A few chapters later (12:13), a man asks Jesus to tell his brother to share the family inheritance, and Jesus answers more abruptly, ‘Who made me your arbitrator?’  We are to take responsibility for our own part in relationships, and not ask the Lord to overcome another’s freedom of choice.

Mary sitting at the feet of Jesus is the traditional attitude of a rabbi’s disciple which was at the time restricted to males.  Jesus in commending her choice shows that women have an equal role with the male disciples in hearing and responding.

That Martha learned the lesson from Jesus is perhaps shown in another account, this time in John’s gospel of the same family at a later time when she makes the same confession as Peter (Matthew 16:16) ‘I believe you are the Messiah, the Son of God, who is coming into the world.’  She has listened and observed what he has done and responded as an ideal disciple.

Seeing how many aspects can be drawn out of a short selection like this is a reminder that anyone can choose to ‘listen’ to Jesus by reading the gospels.