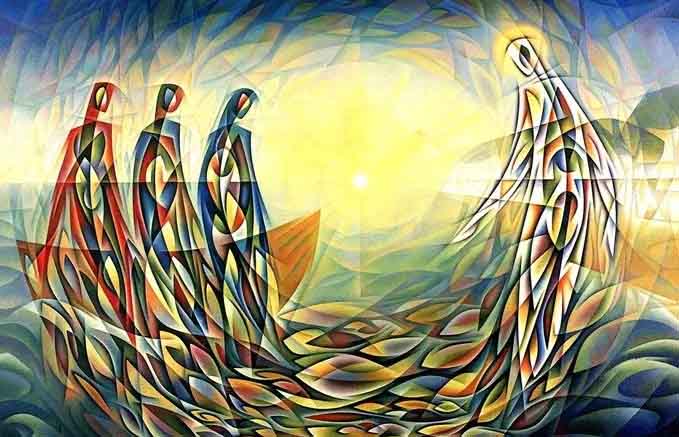 Again the liturgy looks back to the resurrection event, forward to the life of the early church and into eternity with a picture of Christ’s victory in heaven. The gospel reading offers a complex meditation of how we live with the risen Lord.

Acts 5:27-32, 40-41
This is the second time the apostles have been called before the council of Jewish religious rulers, and a second time they are warned to stop preaching about Jesus. Peter expresses the distinction that will guide many Christians still today faced with a conflict between secular governments and their faith: we must obey God before any human authority.

Psalm 29/30:22, 4-6, 11-13
The response applies especially to Jesus raised from the dead, but has meaning also for the disciples, whose mourning turned to joy at the Resurrection and whom themselves were rescued from prison in several accounts in Acts.

Apocalypse/Revelation 5:11-14
[For background on the literary form of apocalyptic, see the notes for the 2nd Sunday of Easter.]

This section uses the image of a liturgy celebrated in heaven pictured as if for an earthly king. The heavenly court filled with angels and archangels was a frequent image in the Old Testament and thus familiar to the first listeners. In our selection the heavenly worship is extended through all creation.

The writer began this scene in Chapter 4 where there are explanations of some things mentioned here. ‘Animals’: four are described in 4:7 with an image taken from the book of Ezekiel, Chapter 1. The faces of these animals became symbols for the four evangelists, still widely used in art. The reasoning is this: The lion for Mark because he opens with John the Baptist, as a ‘roaring’ preacher. The ox for Luke whose gospels begins in the temple where animal sacrifices were made. The human for Matthew who begins with the human lineage of Jesus, and eagle for John, whose Gospel starts from a cosmic point of view, ‘soaring’ above.) In this scene the animals are like those in Ezekiel and represent the power of God in action.

Elders: 24 of them were mentioned in 4:4. They may stand for members of the heavenly court, but perhaps thought of as religious leaders, as that term was used in the early church as well as for important men in the Jewish council. Angels are frequent in this book. The numbering in ten-thousands indicates totality, as does piling up the words of praise.

‘The Lamb’ is a preferred title for Jesus Christ in Revelation, and ‘the one seated on the throne’ is God the Father, using the oblique language of the Old Testament which avoided as much as possible using the ‘name of God’.

The two first readings combined give us two aspects of the Resurrection: its effects on the church on earth, and a vision of Jesus taking his body into union with the Father in heaven.

John 21:1-19
This section bears the marks of an addition to the Gospel of chapters 1-20, but there is no agreement on who is the author. There are both differences and similarities to the style and content of the earlier chapters. It could be a later addition by the final writer/editor of the Gospel, or added by a follower closely united in viewpoint, when a new situation called for further explanations of the apostles’ mission.

There is for us a difficulty if we try to put in sequence and geography all the Gospel Resurrection accounts, with Jesus both appearing in Galilee and Jerusalem. We can’t be sure of the sources of each Gospel – whether written or oral – nor of course know what they decided to leave out. This mirrors real life as we come to it, for although the modern world of records and communications make it much easier to keep track of events there still remain much that is uncertain or not agreed upon. When looking at the gospels, I like to take each resurrection account as it stands with comparison with the others, and also see how it fits into the whole of that gospel. This includes how they use the geography in symbolic ways. Matthew gives great importance to ‘the mountain’ as a place of revelation, so he ends on that symbolic summit. For Luke, Jerusalem is significant from the opening to the end, and so he details accounts taking place there.

The reading heard today is in Galilee, after the previous ones in John taking place in Jerusalem and is particularly hard to fit into a ‘schedule’ of events, although the writer notes it as a ‘third time’.

It looks, however, like an early appearance, for otherwise it would be odd that having been sent on mission in the end of Chapter 20, Peter would be back at his previous occupation of fishing in the ‘Sea of Tiberias’ (Lake of Galilee).

Leaving these questions aside, we can deal with the complexities of these verses. The amazing catch of fish is paralleled in Luke’s gospel, 5:1-11, when Jesus called Peter to be a ‘fisher of people’. In this section, there are also hints of it being a call; the variety of fishes standing for the people who would respond to the call, the unbroken net to the way the church holds all. The exact number of fish, 153, probably had some special symbolic meaning, which is unclear at this time despite the attempts of many scholars to puzzle it out. St Jerome, who translated the Bible into Latin, said that naturalists of the time had this number for the species of fish, although no other reference for this has been found. It is likely though that the catch symbolises the full reach of the church’s evangelism, calling all peoples of different places and times.

As the Beloved Disciple showed more perception at the empty tomb, he again first recognises Jesus, but Peter is the one to act, not waiting even to attend his boat and the nets in his eagerness to reach the Lord. Jesus has already prepared a breakfast meal for them. Some commentators see in the bread and fish a reference to the multiplication in Chapter 6, and perhaps also to the Eucharist which was painted symbolically by early Christians with bread and fish. The mention of a charcoal fire may recall the fire where Peter warmed himself after Jesus’ was taken to the house of the high priest and where he denied knowing Jesus. As Peter had denied Jesus three times, he now is challenged three times as to his love. Of course, he finds that painful! But he has learned humility; he does not say he loves more than the others, but simply relies on Jesus to know his love. Then Jesus, using his solemn words, ‘Amen, Amen’ in the Greek, gives him a prediction that he shall die as Jesus did on a cross. Christ too was led as a prisoner, and had to stretch out his arms on the cross-bar. Like Jesus’ own death, this martyrdom will ‘give glory to God’. The last words then have a double sense: ‘follow me’ in my example of ‘feeding the sheep’, but also ‘follow me even to death.’

It may be that this addition to the Gospel was written after the death of Peter and of the Beloved Disciple, who is mentioned in final verses not included in today’s reading. At that time, the mission from Jesus to Peter would have to be taken on by other shepherds and others who would also become witnesses through martyrdom. New disciples also take up the mission today with Pope Francis asking for leaders who ‘have the smell of the sheep’. There are modern martyrs in areas of conflict, more in number already than those who perished under the Romans.

This chapter ends with a declaration of its reliability, and the statement that Jesus said and did more than was written down, but what we have is enough to give us the trust to obey the last words of Jesus recorded here: Follow me. We all living now have additional chapters to add from our own lives of how Jesus’ love continues for every person, in every time and place.