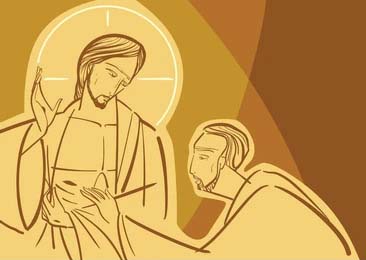 The liturgy sees that the great feast of the Resurrection cannot be appreciated in one day of the year, so through the traditional 40 days before the Ascension, there are more stories of Christ’s appearing to disciples as they gradually take in the world-changing event. The other readings point toward the fuller understanding of what this means for us.

Acts 5:12-16
The readings come out of order in time, for the Gospel tells of Jesus ‘breathing’ the Holy Spirit on the apostles, and this first one describes how they acted in the power of that Spirit. This is one of the summaries of the actions and teachings of the apostles that Luke uses to describe the early history of the Christian Community in Jerusalem. He makes it clear that the first ministers of the Church carried on the activities that Jesus showed in his life, here the stress is on the healings. The power of just the shadow of the apostles passing by is reminiscent of some healings of Jesus in the gospels, like the woman who touched his cloak (Luke 8:43-48), and several healings done at a distance, like the son of the centurion (Luke 7:1-10). There is already at this early date special reverence shown for the apostles, shown in the way people hesitate to come too close to them. Peter is clearly the leader.

Psalm 117/118:2-4, 22-27
This is a psalm of thanksgiving and the lines we read fit into the Easter season, with the refrain that God’s love never ends. The rejected stone becoming the foundation of the building is quoted by Jesus in the first three gospels after the parable of the wicked tenants, who were rejected after killing the owner’s son (Matthew 21:42, Mark 12:10, Luke 20:17). The early Christians used the verse to understand Christ’s rejection by the leaders of the chosen people, which was followed by his vindication in the resurrection. Similarly, the ‘day made by the Lord’ is seen as Easter in the liturgy. Our mass acclamation has used a different translation of the words ‘Blessed in the name of the Lord is he who comes.’ This appears also in Matthew 21:9, as the words of Jesus’ entry into Jerusalem, slightly varied in Luke and Mark.

Apocalypse/Revelation 1:9-13, 17-19
The second reading moves into the timelessness of eternity. ‘Apocalypse’ comes from the Greek word meaning ‘revelation’ and both titles have been used in translations for the last book in the New Testament. ‘Apocalyptic’ is a literary form that was popular in the few centuries before and after Christ, but which became unfamiliar in later times. It is written as if a ‘revelation’ of events, but does not usually mean the writer had the visions described; rather they are a conventional scene setting meant to encourage those living in times of crisis. It speaks of the future as if it was a prophecy of coming events, but usually the message was for the time in which it was written. Revelation is the only book in the New Testament written in the apocalyptic style. Daniel in the Old Testament was also partly in this form.

Because the imagery is often bizarre and symbolic, apocalyptic books are not easy to read without some guidance, as it can mislead those who take it as a prophecy of coming times. Despite interpretation problems, the book has passages of poetic beauty and messages of hope and assurance, and some of this we find in today’s reading.

This mass selection has edited out some extravagant imagery in this beginning section of the book. What is left clearly fits well into the Easter season. The author identifies himself simply as ‘John’ and we know no more than that. It shares a few things, like the title Lamb of God with the Gospel of John, but this book is written in some of the worst Greek of the New Testament, far from smooth style of the writer of the gospel. The New Jerome Biblical Commentary suggests it is most likely an unknown disciple, one with the kind of prophetic charism we see in Acts and the letters of St Paul. Patmos was an island of exile, and he was probably sent there because his preaching of Christ had been taken as an attack on the religion of the Roman Empire.

Seven lampstands: seven is a symbolic number of wholeness and used frequently in Revelation. These lights will later be identified as the seven churches to whom the message is to be sent. Here they form a setting for the vision of the Risen Christ, and may symbolize Jesus as a presence among all church communities. Trumpets figure frequently in apocalyptic as a dramatic call, perhaps because they were used in the Temple. ‘One like a son of man’ could mean just ‘a human person’, in contrast to the animals in the visions described later in the book. It also recalls the words of Daniel 7 where one ‘like a son of man’ is given power and dominion. In the gospels it is the title Jesus used most often for himself, and the rest of the text makes clear this figure is Christ in his risen body. The ‘first and the last’ indicate Christ as the Son of God present ‘in the beginning’ (as stated in the opening of the Gospel of John). And the last as the one in whom all creation is taken up at the end of time. (Compare the Letter to the Colossians, 1:15-20.)

John 20:19-31
This is probably the original conclusion to John’s gospel as there are clear signs, like the last words of our reading, that the last chapter in our Bibles is a later addition. As the original conclusion, it brings all of us in as the heirs to the power of the resurrection and leaves us with the challenge of carrying on Jesus’ message of love and salvation.

The action takes place on two ‘first days of the week’. The ‘first day’ is our Sunday and not the Jewish Sabbath on the seventh day, and quite early Christians began to assemble on the day of the week that Christ rose. John does not explain how Jesus ‘came and stood’, just indicating that it was not in the normal bodily way as the doors had been locked. In the resurrection accounts, there are hints of how Jesus’ new life is not just a ‘reanimated corpse’ but a totally new kind of life. It is something we cannot fully understand now, but nevertheless is to be our destiny as well.

All the first disciples seem not to recognise this Jesus when they first encounter him, but gradually in his presence find that it is the Lord they once knew, but also something more than they had understood about him before his death. That is shown here by the acknowledgement: ‘My Lord and my God.’ This story has given our culture the phrase ‘a doubting Thomas’, but the evangelist is not so much stressing his doubt as emphasizing that all those who were not present in the actual time after Jesus’ resurrection are nevertheless able by belief to live with awareness of his presence among us. We are not told whether Thomas actually tried to touch the wounds of Jesus, but he spoke his word of belief when he saw the Risen Christ face to face, and knew his challenge had been heard. Bruce Vawter C.M. notes the irony of the doubter becoming the one who fully expresses the post-resurrection faith of the Christian community of Jesus as true God. Thomas’ response, ‘My Lord and my God’ translates the Old Testament name for God, Yahweh Elohim.

‘Peace to you’ was a customary Jewish greeting, but here it is stressed by the repetition. Raymond E. Brown in his commentary says Jesus is not just wishing them peace, but actually conferring it on them. It is the profound peace ‘not as the world gives’, rather a deeper inner conviction that is found only through Christ. Jesus then commissions his disciples to carry on his work, especially forgiveness. Catholics have seen this text as establishing the sacrament of reconciliation.

The last words remind us that all which is written in the Gospels of the life and teaching of Jesus – while less than all he did and said in his lifetime – is enough for us to believe that he is the living God and to find our own new life which comes from Christ.