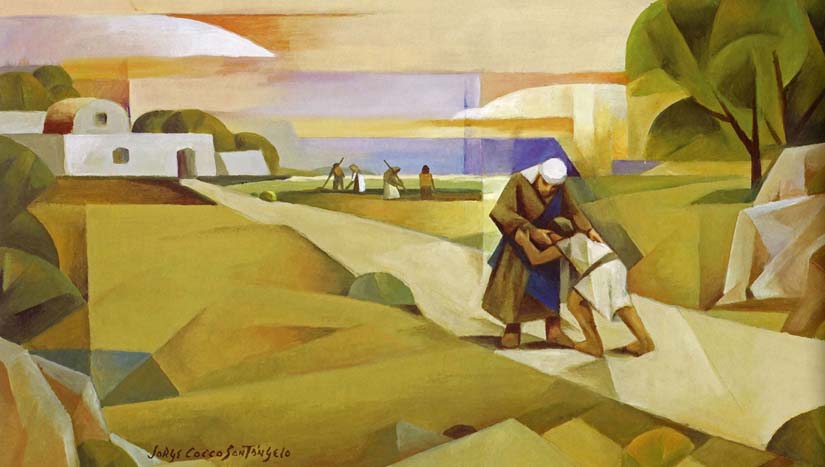 The opening word of the mass today is ‘Rejoice’ – which has given it the traditional Latin name of ‘Gaudete’ and is signalled by the use of rose-coloured vestments. In a time of war, climate problems and widespread poverty, rejoicing may not seem the expected response, but as St Paul tells us, our rejoicing is ‘in the Lord’. (Philippians 3:1)

Joshua 5:9-12
A time of rejoicing for the Hebrews ending their long period of Exodus was their first Passover meal in the Promised Land. Moses did not live to see these events, and Joshua had taken over the leadership of the people, and here he is the one to direct this celebration. The traditions for this feast combine the ‘unleavened bread’ and the sacrificed lamb which was a signal of their liberation. (For more details see Exodus 12:1-13:10) Eating unleavened bread was a sign of haste to leave Egypt, and is recalled in our masses by the use of an unleavened bread for the Eucharist.

The ‘Christian Passover’ is the mystery of the three days ending Lent, which Jesus begins with a traditional paschal meal on Holy Thursday. ‘Manna’ provided in the desert had been called the ‘bread from heaven’, but Jesus in his long teaching in John 6, explains he is the ‘true’ or ‘real’ bread given from heaven, which we receive in his presence, especially in the Eucharist.

For a few more weeks, our journey is still in the ‘desert time’ of Lent, and there is still time for prayer, some form of fasting, and sharing our abundance with those in need, before we begin our celebrations.

This scripture also picks up the theme of a festal meal from the Gospel.

Psalm 33/ 34:2-7
The response emphasizes God’s reaching out to us in love and compassion, with a call to praise and to rejoice in God’s rescue. It is part of the Older Testament background to the parable Jesus presents in the Gospel.

2 Corinthians 5:17-21
St Paul also is looking at meanings of Easter theme: the new creation that comes with Christ’s redemption, here expressed as ‘reconciliation’. It is the one great act of Jesus redemption which brings all believers into the loving relationship with him. In turn ministers, including Paul – and potentially all of us – are entrusted with ‘handing on’ the message. Paul’s image of ‘ambassadors’ is one that fits all in ministry but also the laity who in their daily lives represent Christ as well.

To bring this reconciliation about, Jesus became so identified with humans including all their sinfulness that Paul can say he ‘was made sin’. Christ taking on all our weaknesses and wrongdoing frees us to become what Christ is: ‘the goodness of God’. Such a glorious destiny fits well with the call to ‘rejoice’.

‘Not holding faults against’ us: The translation ‘faults’ seems weak to me, when Paul is looking at all the depth of sinfulness of humanity. There are a number of Greek and Hebrew words to express this, and various possible English choices, like ‘trespasses’ used in the Lord’s Prayer, or ‘transgressions’. The word in today’s reading paraptomata is used several times by Paul, especially in Romans, to mean the breach with God’s love which comes from human wrong-doing. Its root comes from the idea of ‘falling away from’ – from what created humans were meant to be. The image of that is Christ – who as Herbert McCabe points out, is the one who truly shows God’s intent in the gift of creation, the one ‘really human’ human. Whatever words we use for the ‘falling away’, the basic message of scripture is that God is always and everywhere merciful, no matter how often people turn against God and how terribly they treat each other. 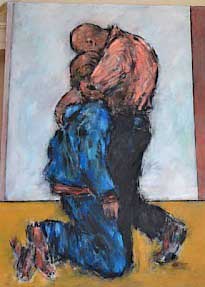 Luke 15:1-3, 11-32
This story is usually called ‘The Prodigal Son’ in English although it has been remarked that it is more the ‘Prodigal Father’ as he is so generous in his love and forgiveness. In his commentary, I. Howard Marshall writes, ‘Of all the parables this one is perhaps the easiest to interpret in outline and yet the most open to a variety of interpretation dependent on where the main emphasis’ is seen. He pretty much proves his case with four pages summarising differing viewpoints, and I find even more in the half dozen books I have at hand. Rather than compare these, I offer my present take on it made after considering the commentators.

To set it in context: Jesus has been accused by some Pharisees for eating with ‘sinners’, that is people not observant of the whole Law. This they think makes him an associate of wrongdoers and therefore not one whose teaching or example can be followed. The idea of ‘table fellowship’ has to some degree been lost in modern times, with our snacking, eating all day and anywhere habits, but has a long history in many societies, even shown in our language. (A ‘companion’ is one you share bread with, is one example.) Eating together was considered a form of community, of friendship, sharing lives along with sharing food.

Jesus’ response is, first, two short parables of looking for what has been lost, a sheep, a valuable coin. This long parable then takes a deeper look at God’s reaction to human sinfulness, and what is the loving reaction to sinners. Nearly all agree that the father around which the parable moves is meant as an analogy to tell us something about God.

A father has two sons, but first we hear only of the younger one. He seems self-centred and irresponsible, wanting a more exciting life away from the land. To ask for his estate is treating his father as if he were dead and his property available to the heirs. By the Law, the older brother would get a double portion, and this father has enough to give the younger a good estate. He sells out and leave home.

Luke has a lively account of what the younger son does, living first in careless pleasures and then utter poverty when a famine hits the area and he is out of funds and can find nothing to eat, only able to get a menial job. Since Jews were forbidden by the dietary laws to eat pork, there is a special sense of degradation in herding pigs. He ‘comes to his senses’, remembering that even the hired servants at his previous home are cared for. It seems to me unclear how truly ‘repentant’ he is – although many commentators think he is. The word for repent is never used. He is however full of regret and remorse once things have gone badly and comes up with a plan. He seems to rehearse a speech, saying the right things in acknowledging his sin and unworthiness, but still planning to ask for a ‘job’ rather than a reconciliation with the family, and forgiveness from his father- or from God. I would say he still has a way to go before repenting not just the results of his wrongdoing, but in wanting to return to a loving relationship. But the point of the parable is that this does not matter!

The detail of the father seeing him from far off and running towards him is significant. It is a sign that the father has been waiting for his return and, careless of any expected dignity, races to reach and embrace the sinful son. He does not even listen to the son’s apology and never thinks of treating him as a servant, or asking for proof of change. Instead the son will be treated as the most honoured of guests. As for St Paul, the degradation of sinfulness is seen like death, and now the son is ‘restored to life’ in the eyes of his father. The ring may signal ‘authority’ – he is not given a job like the hired field workers, but brought into the household as one who has a right to be there.

Next Jesus turns to the older son. He seems suspicious from the start when he hears a celebration, and does not even go in to see what is happening. The father going out to him is another humble reversal of their positions, but the son does not respond to the invitation to join in the celebration. Instead he complains, and it is telling that he looks upon his working for his father as ‘slavery’ –he sees no joy in having lived long so closely with his father. He has obeyed but seemingly without much love. He cannot bring himself to call the younger one his brother, but distances him as ‘this son of yours’.

G. B Caird, in his commentary Saint Luke, says: ‘The father refuses to be forced into taking sides with the one brother against the other; with all their shortcomings he loves them both and has never ceased to regard them as sons, though each in his own way has tried to contract out of his place in the family.’ The father reminds the older son that he shares in all the father has, but still the return of the lost one is something both should be able to rejoice in. The older son had no reason to lament the lack of a goat to celebrated for ‘all I have is yours’. What the father has to offer is his constant loving presence: ‘You are always with me.’

With this picture of this human father showing something of God the Father, we see that when it comes to repentance, to change of heart and behaviour, God is not waiting for us to act before he forgives – he is constantly there offering loving reconciliation where we choose to respond – or even to notice that he is there! In Lent, we are not offering God something he should reward, we are trying to bring ourselves into more awareness of what is already there: enduring, compassionate, forgiving love.

Jesus’ by this story asked the Pharisees and the scribes to have joy with him in welcoming any sinners in need of help. By giving the story to us, we face the same call to rejoice. We live in a society quick to condemn, slow to forgive or acknowledge the needs and problems of others, quick to divide ‘them’ from ‘us’, slow to see that ‘all have sinned’ and are unworthy. Having sympathy for those ‘like us’ seems to come naturally, it may be hard to think that we should ‘rejoice’ when we realise that God is going out to some notorious evildoer. We can sympathise with Ukrainians now, are we ready to rejoice if God’s love reaches Putin?

The story has ended without giving us a ‘happy ending’ of the older brother relenting and rejoicing. The end is left open: how did he respond? And the Gospel does not tell us of the original accusers of Jesus: did they respond and hope for sinners to be welcomed? It is left open for us, too. What response to the call St Paul gives: ‘Be reconciled to God!’