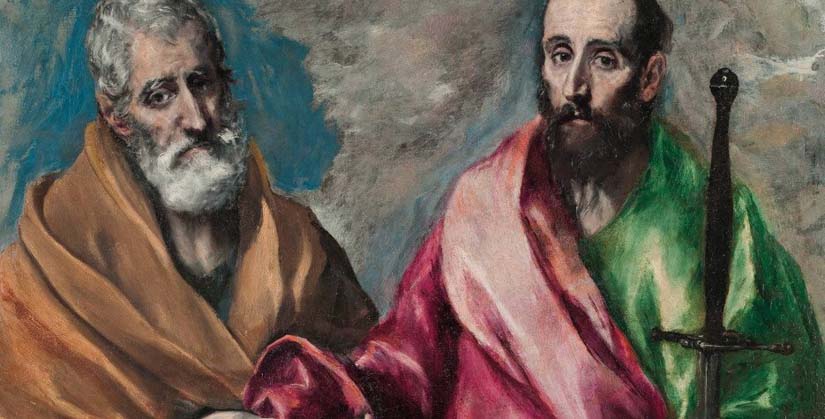 These two Apostles have long been regarded as the most important of the early leaders of the Church and one feast celebrates them together. Both were martyred in Rome around the same time. Peter is listed in the three first gospels as the first called of the disciples, and always appears at the top of the list of the ‘Twelve’. St Paul received a visionary call from the resurrected Christ (Acts 9:1-19) and had a special role as the ‘Apostle to the Gentiles’ when the first mission of the Church was to the Jewish community.

St Peter is the patron of our parish, and of our Diocese of Westminster.

Acts 12:1-11
This lively account is the background for our parish name of St Peter in Chains, though I would say that the point of the story is how St Peter got out of his chains. There were some other miraculous rescues at the time, and we can interpret them as God having more work for the apostles to do before their eventual martyrdom.

Luke tells us that while Peter was imprisoned, the Church in Jerusalem were praying for him. While he does not say it was their prayer that led to the release, it is a reminder that prayer for each other is an important part of being in a Christian community. In our times, Pope Francis from his first appearance as Pope on the balcony of St Peter’s has asked people to pray for him. He no doubt feels the weight of his office, but it also shows the solidarity we are to have with each other as followers of Christ.

Psalm 33/34:2-9
The response celebrates an occasion when the psalmist has been rescued, a type of celebration frequently in Psalms. It is an Older Testament basis for the Christian belief that angels play a role in our lives, though rarely as dramatic Peter’s rescue from prison. The image of ‘encamped’ around may be an echo of the angelic presence on the Exodus from Egypt. (Exodus 14:19).

2 Timothy 4:6-8, 17-18
In this reading, we have the voice of Paul at the end of his life, when his death was near. While Peter was crucified, Paul’s Roman citizenship allowed him the quicker death by beheading. Paul’s realisation that his time was near explains the words of being ‘poured as a libation’. He compares a martyr’s death with the rites of the Jewish Law, when wine would be poured on the altar as a form of sacrifice. Paul in many of his letters, speaks of his dependence on God for all the success of the work he had to do. He also mentions previous attempts when he was threatened with persecution or death – some of these are detailed in the book of Acts. His Letters tell us of some more, and of his being imprisoned at various times, up to his final jailing before death.

Matthew 16:13-19
This story of the the re-naming of Simon as Peter appears only in the gospel of Matthew, although Mark and Luke also tell the first part of the story when Jesus’ asks his disciples what they say of his role. All three record Peter as the one who responds with the answer of ‘You are the Christ/Messiah’. Matthew’s words also stress that it is God who is the source of Peter’s faith – reminding us that the same is true for all disciples – our faith is in response to God’s first coming to us. Simon’s new name has a play on words in the languages of Aramaic, Greek and Latin, but one which got lost in English which give us Peter from the Latin ‘Petrus’. In a literal translation of the Greek text, Jesus said, ‘You are rock, and on this rock I will build my church’. (I would prefer to have kept the root meaning, which would mean we would be calling him “St Rock’!)

The ‘cornerstone’ on which a physical building is the basis for the image the person who would be the primary leader in a community of people united under Christ. Jesus quoted a line from Psalm 118 and applied it to himself: ‘The stone which the builder’s rejected as become the head of the corner’. Now looking forward to the time when he will leave this world, he gives that role of foundation to Peter.

‘Gates of hell’ – the Greek word in the text is ‘Hades’, a word borrowed from the classical world. ‘Gates’ represent a stronghold, as in a fortress, so the image is of the powers of evil arrayed against the good. (In our time, the image was used dramatically in The Lord of the Rings as the gates of Mordor.) There is a story that at the pagan shrine of Caesarea Philippi where this account takes place, there was an opening to an underground spring that was known as the ‘gates of the underworld’. If this is so, Jesus here as so often draws on his surroundings to make a comparison.

The powers of ‘binding and loosing’, which refer to governing within the community, will be extended later to all the apostles in Matthew 18:18.