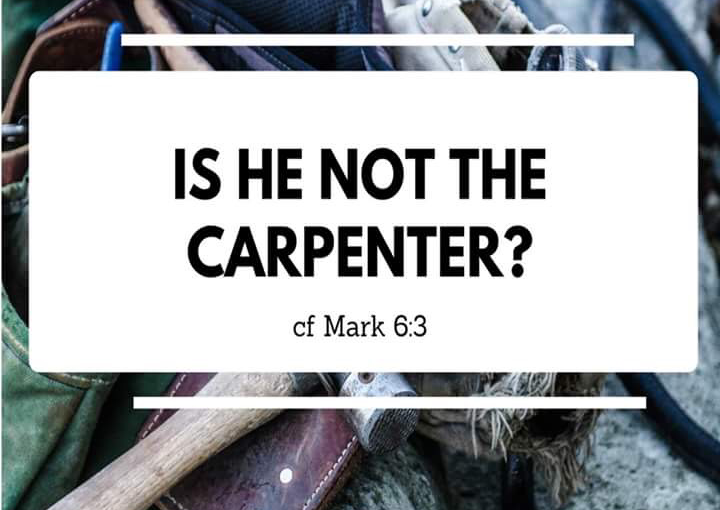 There is a sombre note to today’s readings, about rejection of God’s messengers, a common experience for Older Testament prophets. The Gospel shows that Jesus receives the same reaction from the people he grew up with. There is also consideration of ‘unanswered prayers’ also a common experience, especially now with the health concerns of the pandemic and all the pressing problems of the world around us.

Ezekiel 2:2-5
Ezekiel’s ministry was during the last turbulent days of Judea before the victory of Nebuchadnezzar and the carrying off to Babylon of a significant number of the Jewish population. Like other prophets, his warnings were ignored. What we read today is his ‘call’ to be a prophet, with a warning of how difficult his role will be, and a hint of how his words will be ignored by the ‘obstinate and rebellious’.

‘Son of man’ is how Ezekiel hears himself addressed by God when he receives words of prophecy. ‘Son of…’ expressions are a feature of Semitic languages. ‘Man’: the Greek word stresses the generic rather than ‘male’ and this is equivalent to saying ‘human person’. Lawrence Boadt, CSP writes of Ezekiel: ‘The term occurs over 90 times to contrast the divine speaker with the mere mortal who is to transmit the message. It not only stresses that the message is God’s not Ezekiel’s, but that judgement and deliverance lie in God’s hands not ours.’ In the Older Testament, the expression is picked up only in Daniel 7:13-14 where ‘one like a son of man/human being’ receives everlasting ‘sovereignty, glory and kingship’. ‘Son of Man’ is the usual translation of the way Jesus frequently speaks of himself in the first three gospels.

Psalm 122,/123
This is one of the shorter psalms, and expresses the unhappiness of one who still hopes for deliverance. The last verse with the contempt the psalmist felt at his treatment forecasts the scorn shown to Jesus in the gospel.

2 Corinthians 12:7-10
St Paul was challenged by Corinthians who wanted visions as proof of God’s action, and he reluctantly (and indirectly) spoke of the revelations he himself had received in order to convince them of his apostolic authority. We pick up where he moves on to indicate that visions are not what is most important for him, and in fact he lives not in ecstasy but with many kinds of hardship. He had the example of Jesus before him when he writes of his learning to accept insults. Paul recognizes that the vision of ‘being caught up in heaven’ (2 Corinthians 12:2-4) could have made him proud. The ‘thorn in the flesh’ is not further described, but hints at a physical problem, perhaps one that brought a lot of pain. It was widely believed at the time that such illnesses were caused by Satan.

Paul’s three prayers are answered not as he hoped with a healing but with God giving him the grace to endure. Power ‘at its best’ is shown in weakness: it means that the power of Paul’s preaching is not his own, but comes from God working in him. We are invited to understand this definition of power, which goes against what ordinary life means. Invited also to accept, as St Paul did, that God is still with us in our troubles and that God is working in and through all aspects of our lives.

Mark 6:1-6
After hearing often in this gospel of crowds enthusiastic about Jesus’ teaching and healings. we have the contrast of those in his home town. Mark does not name ‘his own place’ but we know it as Nazareth from other gospels. It was an insignificant village in his time and he had gone elsewhere to bring his teaching to a wide audience.

As often in Mark there are no details what he said, but we can surmise that he was ‘speaking with authority’ (as in Mark 1:27-28). Mark has shown how astonished people have been elsewhere in Galilee, where with so many people listening to him and wanting to see him and be healed that he could hardly move from the crowding. Here all is different. To the people Jesus had grown up around, he is ‘just a local boy’ and they won’t accept him as anyone having special wisdom and wonder-working power. They know his parentage and his family, and remember him working as a craftsman and that blinds them to his difference. They may even feel envy, as Luke hints.

Mark tells us in the first words of his Gospel that Jesus is the ‘Son of God’, but throughout he shows examples of how thoroughly Jesus is also human. In today’s reading, he is show to have family connections and neighbours, and working as a craftsman. ‘Son of Mary’: it was customary to identify one as the ‘son of’ his father, and naming Jesus by his mother may have been a contemptuous insult about his parentage, but it could mean no more than at this time Joseph had died and Mary was still there. ‘Brothers and sisters’: In the Catholic tradition, Mary had no other children, and various suggestions are offered as to whom were these siblings. The word for ‘brother/sister’ in Aramaic can be used for cousin, or some other close relative. Mark seems uninterested in any family details; the emphasis is on the villagers’ sense that they know all about Jesus just because he grew up around them. ‘Without honour in his own country’ was a saying known both in the Jewish and Greek worlds. Jesus recites it indicating that he is indeed speaking with the power of God, but is treated as had been Ezekiel and other persecuted Jewish prophets. It is not the messenger who is at fault, but those who are not ready to listen to God’s word.

Last week, we heard of a faith that saved the woman with a haemorrhage, now lack of faith keeps most in Nazareth from being cured. Jesus was ‘amazed’ at their lack of faith, another sign of his having human reactions. I would guess that he was also hurt by the rejection by people he had known and cared for. But God does not force himself on anyone. Freedom to accept or reject God’s truth and love is an essential part of our human nature. We will see over and over in Mark how people misuse their freedom, and how God works, as it were, around that so that ultimately God will will be done. But that final triumph for us comes through the suffering of Jesus, as for Paul.

We hear of no more of Nazareth in this Gospel. Jesus leaves them and turns his attention to others. There will be a deeper rejection to come that will lead to his death.