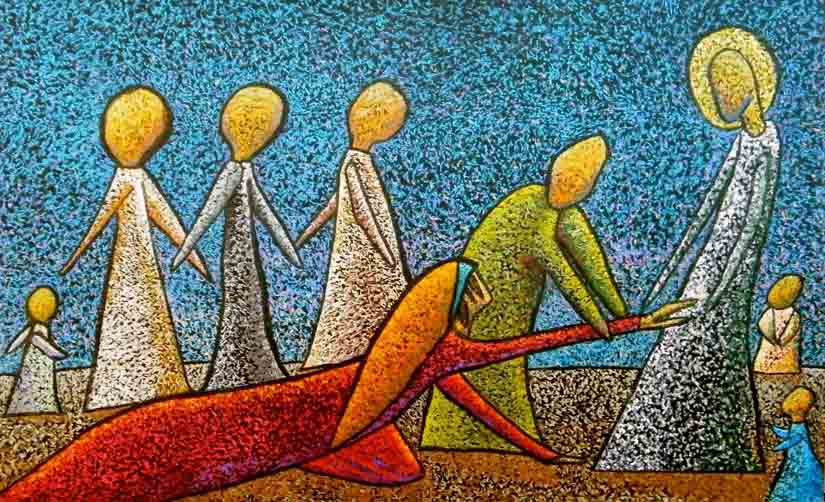 In a time of a pandemic, we become more aware of the need for physical healing. We rely on the advances of modern science, now with the hope of the relief vaccines bring. For centuries there was less that doctors could do – and that is reflected in the Gospel where we hear of a woman who has spent all her money on doctors, and only gotten worse. Once Jesus was known to heal various illnesses, he constantly attracted crowds wanting his personal touch. Mark shows us two hard cases: can Jesus heal even by touching his clothes, and a girl who has died before Jesus can reach her?

Wisdom 1:13-15, 2:23-24
This is the last book written in our ‘Old Testament’, composed in Greek in the first half of the century before Christ. (It is not included in the Jewish sacred writings, nor in some Protestant bibles.) The author looks back through the history of the Jews, but also takes in the conditions of his/her own times. As Addison G. Wright. S.S. writes in The Jerome Biblical Commentary, ‘In taking the cultural developments of his day seriously and being willing to rethink and recast his traditions in new and relevant ways, [the writer] has left a model of religious thinking for later generations.’ An example of this in our reading is looking at death, which had often been thought of as a punishment from God in earlier biblical books. This Wisdom writer sees more clearly the immortality for which we are created. God does not desire death but has created us with choices for following the way of life or acting in sinfulness. This view of God as wanting to give us ‘life more abundantly’, is a good introduction to the Gospel reading where Jesus’ disciples see that he has power over death.

Psalm 29/30:2, 4-6, 11-13
The psalm, older than the Wisdom reading, speaks of death as if one is left in the grave. The psalmist has been rescued, seemingly from near death in illness or under threat of his enemies, and praises and thanks God for this deliverance. The final words prepare us for the ‘mourning’ in the gospel reading which also ended in rejoicing.

2 Corinthians 8:7, 9, 13-15
St Paul’s words written to the church at Corinth are relevant to the situation of the world around us. Paul writes tactfully with praise for the relatively well-off community, which had made promises to help out Christians in need in other places, but had not yet carried them out. In present terms, help has been pledged, but the payment not made. In our time Christians are through our news media, daily confronted with needs near at home and around the world. The pandemic has brought a new challenge: the sharing of vaccines. Meeting the needs of others runs counter to the consumer culture we live in and the monetary policies of governments. Especially when our countries have suffered economic hardships from the effects of Covid-19, and people are eager to get back to ‘the way it was’, it seems hard for some to understand that we in developed countries have more than enough to share – both with those in our cities and countries and around the world where people were already struggling with poverty and famine.

Mark 5:21-43
Two healings are joined in Mark’s ‘sandwich’ style, in which one incident is cut in half and one told around another. The ‘sandwich’ at the centre of this allows the passage of time between Jesus setting out for the home of the synagogue official and his arrival there. Mark, however, often lets the two combined stories reflect on each other and it is worth looking for a connection.

Jesus has been away from the centre of his early ministry in Capernaum, and once he returns, a crowd quickly assembles. Sensitive to their needs, he does not head for a home, but stays at the lakeside with them. The synagogue official, who is one of the most important people in the town, approaches in great humility, and of course desperation. Jesus immediately consents to visit his daughter, and the crowd follows along. One woman takes advantage of the crush to approach Jesus, intending not to make herself known by making a request. She had been ill for 12 years with a haemorrhaging condition that makes her ‘unclean’ in the Jewish ritual perspective, and anyone in physical contact with her also becomes ‘unclean’. She touches only the edge of Jesus’ clothing so she won’t be contaminating him. She has a great faith that this minimal contact will heal her.

There is something mysterious in Mark’s simple statement that Jesus felt the power going out from him to heal her, without seeming to know who was healed. His question gives her to opportunity to reveal herself and connect directly to him as a person, and not as to someone of magic power. The woman finds the courage to match her faith and to tell him her story. Jesus responds tenderly, shown by calling her ‘my daughter’. He confirms her healing and says her faith has made it possible.

This healing and the crowd have delayed Jesus and Jairus, and now word is brought from his home that it is too late to heal the girl. Jesus ignores this, and now asks the father to have an even deeper faith than that shown by the woman – that he can bring life even to one already dead. When he reaches the house, his dismisses the crowd and the professional mourners, who have already gathered and begun a noisy lamentation. So that he can proceed in quiet privacy, Jesus takes only the parents and his three closest disciples to the child’s room. It may be Peter, who was there, who remembered Jesus’ actual words spoken in the Aramaic that was the common speech of that time. (Mark is the only gospel to note from time to time Jesus’ Aramaic words and each time he translates them into the Greek in which the gospels were first read.)

Jesus’ words to the girl are also tender, and he is the one who is aware that after her illness, she needs something to eat. And that also confirms the reality of her return to life: she is not a ghost. Touching a dead body is another way ritual uncleanness was contacted, but Jesus is unconcerned and the result is that his touch does the opposite, bringing life and wholeness. It is health and life Jesus comes to bring, not exclusion for the unfortunate.

The two healings thus both illustrate that Jesus does not feel bound by the rituals concerning a sense of ‘purity’, which has nothing to do with morality, and in both cases compassion is shown as more important.

Throughout the accounts of Jesus’ ministry in Galilee, Mark often records him as asking for silence after a healing. One good reason for this is that spreading news of the miracles draws the large crowds which make it hard for anyone to hear his preaching and also for closer contacts, like the ones in these two stories. But as commentators point out, since the child had been declared publicly dead, it is hard to imagine how no one is to know of her healing when she is seen well and walking about! Asking for silence from those in the house, may, however, have allowed Jesus and his disciples to leave without being overwhelmed by people crowding around him again and also gave the family time on their own to care for their daughter.

Mark uses this story of faith and of what seems the greatest miracle in raising one who is dead as the climax of the first stage of Jesus’ ministry. What follows next in the Gospel is the story of Jesus’ rejection in his home town (6:1-6), which we will hear next week. It forms an ironic contrast to these two stories of faith and the two different accounts are reminders of the responsibility of choice that was also behind the first reading.