Church is open from 8:30am daily 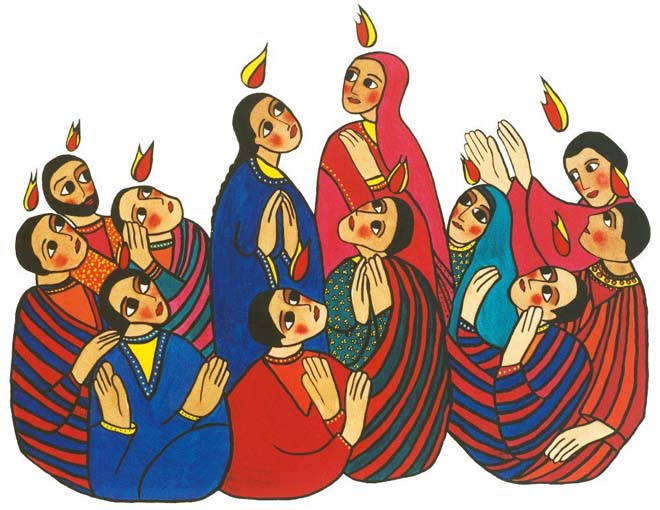 Pentecost is the final great feast of the Easter season. On both the vigil and the feast, many biblical texts reflect on how the Holy Spirit works in our lives and in the church. While good for everyone to reflect on, they can be especially helpful to people who may still not be able to join a Sunday mass.

The Spirit is frequently associated with God’s creative power, from the first chapters in Genesis, often in Psalms such as the response in today’s mass, 103/104 and in the image of a hymn associated with Pentecost, ‘Come, Creator Spirit’. The related idea of a ‘renewal’ is background to other references.

Prophecy in the Old Testament was often described as the spirit of God ‘coming on’ the prophets who could then speak of the revelation they had received. For example, Isaiah 61:1 which is quoted by Jesus in Luke 4:18ff. In an eerie vision, Ezekiel 37:1-14 sees God’s breath revive dry and scattered bones, symbolic of the Spirit’s power to give new life. Joel 3:1-5 lists dramatic events coming from God’s Spirit ‘poured out on all humanity’. Peter will quote Joel in his preaching on Pentecost day – see Acts 2:16-21. Romans 8:22-27 is Paul’s mystical vision of the Spirit acting in all creation and in us as disciples. The words on the Spirit praying within us even when we cannot find words is a message can be comforting in times of uncertainty, discouragement or anxiety.

Much of the Bible is written in poetic language, and poetry often leads to a deeper understanding of non-material reality than does abstract reasoning. Several images are frequently used for the spirit of God coming into the world or onto humans. One idea embedded in language is a comparison with ‘breath’ or ‘wind’, in Hebrew (ruach) and Greek (pneuma) Without a modern scientific knowledge of what air is, the ancients saw it as a reality which cannot be seen, but whose effects can be experienced. It was observable that people and animals were alive while breathing, and when life stopped, there was no breath. God is often called ‘the living God’ in contrast to idols, was seen as the creator of all life, most vividly in the opening of Genesis, and when he ‘breathes’ life into Adam.

Perhaps less obvious to us is the comparison of Spirit and water – this is often in the verbs used like Joel 3:1-5, one of the choices for the vigil mass: ‘I will pour out my spirit on all humankind.’ Water in a dry climate like the Holy Land is seen as closely related to life, as indeed science bears out – we die quickly without enough water to drink. There was an important Jewish feast called ‘Pentecost’ [from the Greek word and the one we have adopted for our feast]. It is also called ‘Tabernacles’ or tents, sukkoth in Hebrew, as people would build temporary outdoor shelters to celebrate in. Perhaps a reminder of their days in the Exodus, maybe like moderns enjoy ‘camping out’ for a holiday.

In Acts, Luke tells us this was the time of the Jewish feast when the Spirit came on the disciples. The feast was also associated with the rain needed for an abundant harvest. In the vigil mass, the gospel is John 7:37-39 describing Jesus at one celebration of the Jewish festival. As part of the ritual, water was brought to the Temple for 7 days, and poured out over the altar. Jesus bases a promise on that ritual. ‘On the last and greatest day of the festival, Jesus stood [in the Temple] and cried out: If anyone is thirsty, let them come to me…As the scripture says, “from him shall flow fountains of living water.”’ The evangelist adds, ‘He was speaking of the Spirit which those who believed were to receive.’ Another statement of Jesus stresses the aspect of abundance, ‘It is not by measuring out that he gives the Spirit.’ (John 3:34)

A third image is fire, based on the idea of fire used for purifying metals. Gold as the most precious of metals and one that could not ‘corrupt’ – but needs to be refined when found in mixtures of ore. To get pure gold, the ore is heated to burn off the ‘impurities’. God was ‘like a refiner’s fire’ and would come to purify his people. (Malachi 2:2-3, Zechariah 13:9). All three symbols – wind, water and fire – are in the Pentecost readings.

While most of these images are ones of powerful actions like the gifts which may overwhelm the receivers as on Pentecost Sunday, there is another strand in scripture which says the coming of the Spirit may be gentle and private. This is portrayed as a dove at the baptism of Jesus. There is also a longer story of Elijah who witnessed the presence of God, not in dramatic events of hurricane and earthquake but in a ‘sheer sound of silence’ – so delicate it scarce registers as even a whisper. (1 Kings 19:9-12)

Acts 2:1-11
In today’s mass we have two accounts of the Spirit coming to the disciples, Luke in Acts and John in the Gospel. John Marsh is his book Saint John, says it is ‘futile’ to ask which one is right about which time and other details. Our New Testament has four evangelists, each with their own theological special focus and literary method. The church has kept all four, seeing that they fill out and complement each other. Their purpose is not to write the kind of historical events we may imagine now could be captured on video, rather they aim to lead us to take into our own lives the saving power of God that comes through Jesus Christ in his life, death and resurrection. There is a certain amount of mystery in all this, and different ideas to express this can all be valid.

Luke likes to use dramatic scenes to present his message, and the Spirit coming upon the disciples gathered in prayer is one of the most dramatic. We often think of this as happening only on the twelve apostles, but earlier in Acts Luke mentioned ‘certain women’ and Mary the mother of Jesus meeting with the apostles, and both Catholic and artistic traditions see Mary as there on Pentecost. Luke makes subtle connections to both other parts of his work and to the Old Testament. Here ‘what sounded like a powerful wind’ recalls the Old Testament comparisons noted above. The reader who has in mind the early parts of the gospels, John the Baptist spoke of the ‘One more powerful’ to come who would ‘baptize in Holy Spirit and fire’ and now what ‘seemed like tongues of fire’ fulfil John’s prediction. By using the word ‘seems’ Luke suggests the experience was somehow ‘like’ wind and flame but not actually the natural elements, not identical with normal experience, but best understood by comparisons.

There were two results of this – one Luke describes in detail was speaking in foreign languages. The other is inferred from the following actions of the disciples. They had closed themselves off in a room ‘for fear of the Jews’, a place where it seems they meet after the death of Jesus. Now they are suddenly unafraid, and out of the room into the streets where people were out celebrating the liturgies of the Jewish Pentecost and ‘make a public spectacle of themselves’. This account will be followed in Acts by Peter boldly preaching to the crowds about Jesus, resulting in numerous converts. (For all of this, see Acts 2:14-42.)

1 Corinthians 12:3-7, 12,-13
The first sentence reminds us that our very faith in Jesus is a gift of the Spirit. In this Letter (chapters 12-14), St Paul writes much about the ‘gifts’ of the Holy Spirit (‘charism’ is an English version of the Greek word and also used today). The community in Corinth was overly concerned with the spectacular gifts and proud of displaying them, and therefore Paul feels the need to correct their excesses. ‘Speaking in tongues’ was particularly prized and had created a chaotic atmosphere in their meetings. Paul gives an important reminder that all such perceptible gifts were for the good of all – and not an excuse for personal pride or praise from others. Then the basis for what is called ‘the mystical body of Christ’ is given here – we are to see ourselves as a part of the greater whole brought together by the power of the Holy Spirit. In a time when divisions between believers are often emphasised, this is a corrective, an incentive to accept others with different views, and be open to others’ gifts.

Sequence
‘Sequences’ are songs before the Gospel reading set for certain important feast days. This one combines a prayer for all of us to receive the Spirit in our lives with praise for the many effects which come through that power. The Latin hymn dates from the 13th century and has often been set to music. This missal translation with a certain archaic language sets it in rhyme. (I found the Latin version and a more literal prose translation on Wikipedia.) It is a prayer that could be used whenever we feel the need of ‘empowerment’.

John 20:19-23
This ‘first day of the week’ is Sunday which took over the celebration of the Jewish Sabbath for Christians. John records an early appearance of the risen Jesus to unnamed disciples. When Jesus spoke at an earlier time on the Jewish Pentecost – see above at the Vigil reading – John added, ‘The Spirit had not as yet been given because Jesus was not yet glorified.’ For John, the glorification was one event: life-death-resurrection. Now that Christ has passed through death and come into his full glory, he passes the Spirit on to his disciples and gives them the power to carry on his work of salvation by forgiving sin. ‘Breathing on them’ recalls the association of spirit and breath/wind in the Hebrew and Greek languages.

In another example of how each evangelist places traditions of Jesus’ life to fit their particular theology, Matthew speaks of the power to ‘bind’ or ‘loose sins’ as given after the profession Peter makes that Jesus is the Christ (Matthew 16:16-19).