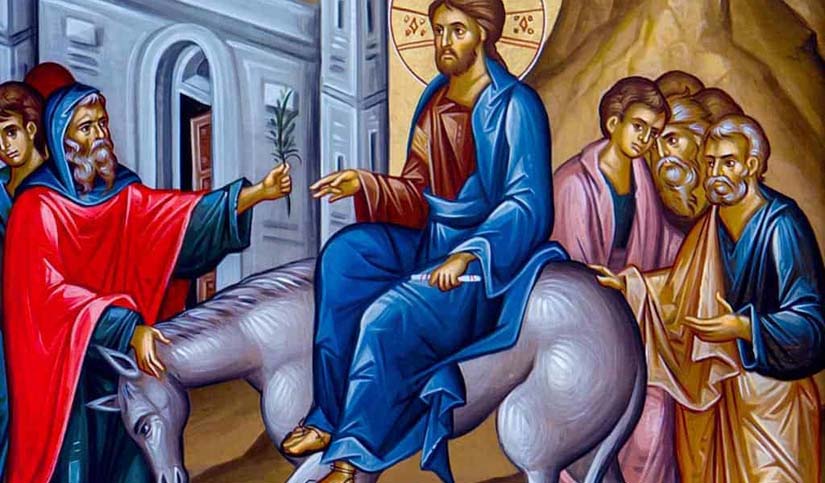 This year the liturgy of Holy Week is affected by the pandemic restrictions. For those not be to join with a congregation, the scriptural texts can be a basis for home commemoration and personal meditation.

Mark compresses the last events of Jesus’ life into one final week, and the liturgy puts the beginning and end of that week into one day. There are two gospel readings, one for the palm blessing and procession before the Mass, then the Passion account is read in the mass.
The readings are available online here.

Mark 11:1-10 for the Palm Blessing
Jesus had gone up to Jerusalem for the Passover the week before his death. Up to now, he has called for secrecy about his identity as the Messiah/Christ, but that changes as he comes to the Holy City. Echoes behind this reading are prophecies from Zechariah; the first mentions the Mount of Olives as where God’s kingship will begin in the last days. Jesus comes as that king mentioned, but in the manner from a second prophecy: ‘Rejoice greatly, O daughter Zion, shout for joy, O daughter Jerusalem! See, your king shall come to you! A just saviour is he, gentle and riding on a colt, the foal of donkey’. Jesus does not enter as a military conqueror on a horse and chariot but in peace symbolized by the young colt. Solomon, son of David made an entry like this (1 Kings 1:32-34), so the idea of a king on a donkey was not as strange to them as it is for those accustomed to regal pomp. The crowd calls Jesus ‘Son of David’, possibly in light of this verse or as a messianic title.

We hear of the first of several mysteriously helpful persons in Mark’s Passion-Easter account. The owners of the colt respond to the need of the ‘Master’ (the word here is kyrie and better translated ‘Lord’ but that is ambiguous then as it was used both for God and as a term of human respect). Mark offers no further enlightenment of how Jesus knew the details nor what he meant. Spreading cloaks before him was a sign of honour, like the ‘red carpet’ of our times. The crowd greeting him sing words from Psalm 118, part of the ‘Hallel’ psalms of praise which were sung at feasts. The people add the hopeful note on the coming of the kingdom promised David.

Isaiah 50:4-7 First Reading for the Mass
This is the third of four ‘Servant Songs’ in Second Isaiah, in which early Christians found insights into the life of Jesus, especially of his suffering. The speaker is the unnamed ‘Servant’, who had been bringing good news, but it was not received by those who heard him. The persecution is poetically described. The willingness to face shame and death, trusting totally in God, is seen as a foreshadowing of Jesus in his passion.

Psalm 21/22:8-9, 17-20, 23-24
The response is much in the same mood with again an innocent person persecuted. The suffering is even more vividly portrayed in words that fit some of the events of the crucifixion of Jesus. All these verses are later parts of the psalm that Jesus will speak the first line of, shortly before he dies on the cross.

Philippians 2:6-11
This may a hymn quoted by St Paul, as it in a poetic form with a descent to the depths, then a rise to the highest place of praise. It contains a theological summary of Jesus’ life from pre-existence as equal to God the Father, to the humbleness of becoming human, accepting death, even the death of a criminal on a cross. Then comes an upward reversal as he is raised and re-united to God in heaven.

Mark 12:1-15:47 or a shorter selection, 15:1-39
The long selection opens with the intent of the Chief Priests and the ‘scribes’ to arrest Jesus, and in one of Mark’s typical ‘sandwich’ patterns, this will be matched by Judas’ decision to betray him. In between, is the story of the unnamed woman who comes to anoint Jesus with an extravagantly expensive jar of perfumed ointment. Her intent is not told to us, but we may assume an act of devotion or even of recognition, for both kings and priests were anointed as a sign of their office. Jesus makes the connection with his death, for the usual anointing for burial will not take place after the crucifixion and the Resurrection will prevent the women who come on Easter morning from carrying out a belated anointing of what they expect to be Jesus’ dead body. The woman’s act of replacing the anointing thus ties her action to the Resurrection and the proclamation of Good News and that seems the reason Jesus says the story will be told with the gospel message. Curiously, although the woman’s act is remembered, her name is not told us. This central section gives us the promise that the enemies of Jesus will not be triumphant in the end although seeming to succeed with their plotting.

With the preparations for the feast of Passover, the day of the Unleavened Bread, we met a second mysterious person. Carrying water was the usual task of women, so a man with a pitcher would be easy to notice, but it again requires the disciples to follow instructions which seem odd. This time the title Jesus tells them to use is ‘Teacher’ which may suggest the unnamed owner of the house with the large room has been an otherwise unknown disciple of Jesus. ‘Couches’ are mentioned because at the time, guests reclined for a formal meal. Mark tells us very little about the Passover meal, except that he first warns the disciples of betrayal, and perhaps as a last appeal, warns the betrayer of the horror of what is about to do. Then in the simplest and shortest of words, he gives them the bread and wine of the Eucharist. Mark tells nothing more of what could only have been a moment of great wonder to those first hearing and seeing Jesus and leaves it to our own meditation. Another ‘sandwich’ around this striking event is the prediction now of the desertion of the rest of the disciples and Peter’s denial.

The ‘Agony’ in Gethsemane is the first part of Jesus’ suffering and Mark makes it vivid indeed as Jesus feels the full weight of human weakness. Peter, James and John have been the ‘inner circle’ in other parts of the gospel, and are the three who protested earlier that they were willing to share the suffering of Jesus. Now they miserably fail at the first simple test of staying awake while he prays.
The third and most mysterious figure is seen after the arrest: a young man strangely dressed except for ‘a linen cloth’, loose enough that he could escape when the temple police lay hands on him. The Greek word translated ‘linen cloth’ is the same word that will be used of the cloth Jesus’ body will be wrapped in. One traditional interpretation is that the man is Mark himself, but Mark does not hint that. The young man’s fear and fleeing with nothing on does emphasizes the total human desertion Jesus has at this point and some commentators think that the point of the odd detail

[The same Greek word for ‘young man’ (neaniskos) will appear in Mark’s account of the empty tomb, where a ‘young man’, fully clothed this time in white, tells the women Jesus has risen and gone before his disciples to Galilee. Some of the persons in Mark’s gospel have symbolic roles to play, although they may also have been real historic persons. The young man who first runs away from the Passion could be seen as a ‘typical’ disciple, who later will happily take on the task of proclaiming the Resurrection.]

The drama of the two trials and the mistreatment are shown dramatically, with a picture of the speed of the events of the night. There is a hint of the future with Mark’s naming of the sons of Simon of Cyrene –Alexander and Rufus are not mentioned in the other gospels and probably become Christians known to Mark’s community.

The only words Mark records of Jesus while on the cross are the opening lines of Psalm 21/22, a long lamentation of a persecuted righteous person. There is a great sense of desolation in these words but that psalms ends in hope and triumph.

There were two veils in the Jewish temple, one for the innermost sanctuary entered only by the High Priest once a year on the Day of Atonement. The tearing of the veil is symbolic not only of the end of the Jewish sacrifices with Jesus as the perfect sacrifice but also suggests that God will no longer be inaccessible to people in an inner sanctuary, but all can meet God in Jesus himself. The climax comes with the words of the centurion, a startling act of faith in the circumstances. Mary Healy writes: ‘In contrast to the mockers who had demanded to “see” Jesus come down from the cross so that they might believe, the Centurion “sees” Jesus give up his life on the cross and believes.’ Mark has pictured the depth of Jesus’ human suffering, but that is immediately followed by a first exclamation of faith in his divine nature.

Quietly after this climax, Mark sets the stage for the Resurrection. The reality of Jesus’ death is carefully pointed out – against the later efforts of those who would claim there was no resurrection and that Jesus was not really dead. It is emphasized that the women know exactly where he is laid and will make no mistake like going to a different empty tomb on Easter. After the horrors of the crucifixion, there is the gentle comfort of the women who – although from a distance – had kept watch over Jesus’ on the cross and are ready to serve him even in death. And the small ‘miracle’ of Joseph who had been too cowardly to acknowledge Jesus in life, now coming forward courageously to do what he can after the death.

Mark leaves us to ‘rest’ symbolically as Jesus did in the tomb, as we have a week’s time to meditate on the events of the Passion but with the assurance of a triumphant resurrection.