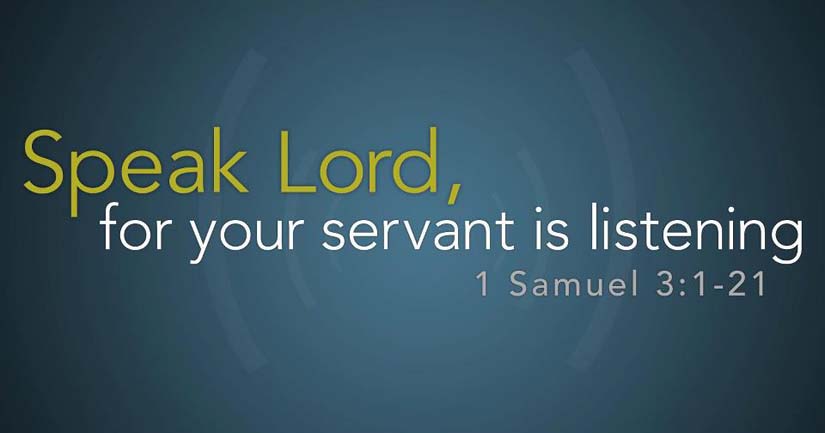 Fitting our commemoration of ‘Peace Sunday’ is the opening prayer of today’s mass: ‘Father of heaven and earth, hear our prayers and show us the way to peace in the world.’ After a long celebration of Advent and Christ’s birth, ‘Ordinary Time’ brings us into the period of his ministry. (The ‘First Sunday’ disappeared with some liturgical changes to the Christmas season, but still names the weekdays.)

1 Samuel 3:3-10, 19
This reading is from a turning point in the history of Israel, when religious authority was given to prophets with Samuel chosen from childhood to speak the message of God. It predates the temple at Jerusalem and takes place in the northern sanctuary of Shiloh. The book opens with the story of Samuel’s birth. His mother Hannah, unhappy because she was childless, prayed for a son and promised if she had one, he would be dedicated to God from his youth. Her prayer was answered and she followed through by taking him when he was still a lad to the shrine at Shiloh, and leaving him under the care of the priest, Eli. Our selection begins with the boy serving in the sanctuary, and apparently sleeping where the Ark of the Covenant was kept. There is a folk-tale style of the three times it takes for Eli to understand that it is God who is speaking to Samuel. The liturgy does not include the words of Samuel’s first prophecy, which concerns the family of Eli, but jumps ahead to the conclusion where Samuel as an adult becomes the primary voice of God for his time.

The line given to Samuel is one suitable for our own ‘listening prayer’: ‘Speak, Lord, your servant is listening.’

Psalm 39:2, 4, 7-10
This psalm echoes several themes of the Samuel selection. It begins as thanksgiving for answered prayer, then gives us a ‘prophetic’ message which compares to Micah and Isaiah, who saw that it is not external sacrifices that God desires, but the response of the whole person doing God’s will. The last verse indicates that telling others of God’s goodness to us is the natural response to receiving mercy and blessings. The Psalmist’s word, ‘Here I am, I come to do Your will’, is another example for prayer.

1 Corinthians 6:13-15, 17-20
At first look, there is not an obvious connection between this reading and the other two, but there is something that flows from the emphasis we have all through the Christmas season on the ‘Word made flesh’ – Jesus Son of God taking on a totally human existence. The body is an integral part of the person, not something ‘inhabited’ by a separate spirit which can live on a more exalted plane. Paul stresses that Jesus took his body, in its resurrected form, into heaven. From that flows Paul’s idea that the body must be respected, for our bodies should be part of our oneness with Christ. In the gospels, Jesus says that the coming together of a man and woman and remaining faithful to each other was ‘meant from the beginning.’

Corinth had a reputation for sexual license and it must have been hard for new converts not to be influenced by their surroundings – just as it can be for people today in our culture that is as sex-obsessed as Corinth was. In modern media, being ‘liberated’ means unrestricted sex, but for Paul liberation means sharing in the fullness of Christ’s love. Paul gives his correspondents – and therefore us – his vision of what bodily love is meant to be for a believer, one respecting our own integrity and that of a spouse.

‘Fornication’ is a word not heard much outside of such older texts as this; the meaning of the Greek is better captured in N. King’s translation as ‘sexual immorality’.

John 1:35-42
While Mark is the gospel in focus in Year B, it is the shortest of the four and some Sundays will take a reading from John. In Advent, we heard of John the Baptist as the one who ‘prepares the way of the Lord’. After telling, in the section before this reading, of John’s witness, John the evangelist now dramatizes this way as the Baptizer passes some of his own disciples on to the one to whom his preaching was to lead. Both Mark and John show that Jesus begins to chose disciples from the first days of his public life, but each of the evangelists has stylized this, Mark as a ‘first day’ and John gives us a marked out week. John it seems further condenses the process of recognising who Jesus is. The fullness of belief in ‘the Messiah’ as ‘the Son of God’ probably follows the line of Mark’s gospel with the understanding of the disciples coming gradually during their life with Jesus.

‘Lamb of God’: This title appears only in John’s gospel and only on the lips of the Baptist. John the Baptist has earlier on the day before this story begins identified Jesus as the Lamb of God with the addition of ‘who takes away the sin of the world.’ (These words which have been taken into our Mass just before communion.) The lamb has various resonances from the Old Testament, as in the animal sacrifices as a sin-offering and the Passover lamb, but for the Evangelist, Jesus is the ‘real’ or ‘true’ Lamb who actually does what the previous sacrifices symbolized.

The two disciples use the respectful form ‘Rabbi’ which the author translates for us as ‘Teacher’. The idea of wanting to know where Jesus was staying is a way of saying they want to be his disciples. He readily invites them to ‘come and see’. In the way this Evangelist frequently gives depth to simple words, here the use of ‘see’ carries the idea of deeper knowledge than just sight. After they have stayed and ‘seen’, they advance to the identification of Jesus as the expected ‘Messiah’, given in the Greek equivalent, ‘Christ’.

All the New Testament knows Simon as Peter but only in Matthew is this explained as the ‘rock’ on which Jesus builds his church (Matthew 16:16). In Aramaic the pun on rock is clearest; it also shows up in the Greek and Latin but is entirely lost in our English versions. John simply notes the re-naming, but adds the Aramaic form Cephas, and gives us the translation into the equivalent Greek, Petros. Only in this gospel, do we read ‘Messiah’ (which means ‘anointed’ or specially dedicated) and ‘Cephas’ which are in the Aramaic language Jesus and his disciples commonly spoke. Christians chose not to continue translating the meanings into their own languages, and we mostly use ‘Christ’ from the Greek and always say ‘Peter’ instead of ‘Rock’.

The equivalent in this Gospel for the naming of Peter has Jesus looking at him, with some special intent or insight, here translated as looking ‘hard’, by King as ‘fixed his gaze on him.’ Raymond E. Brown says it means looking with ‘penetration and insight’. Jesus thus sees something in Peter that will make him a strong foundation for the future. His ‘commission’ as leader is noted in the last chapter of John, with the words, ‘Feed my sheep.’

John always has his readers in mind – we also are invited to ‘come and see’, to make a choice to be disciples.