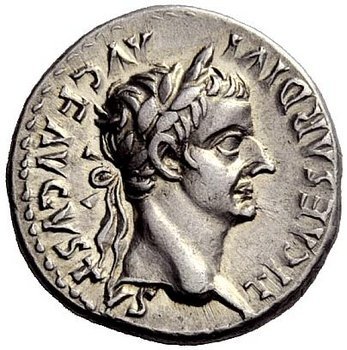 What is the right relationship between those who believe in God with the secular state in which they live? This question posed in the readings, has some bearing on this World Mission day, when we support those carrying the Gospel throughout the world. Some missioners go to places where they may be persecuted, and risk their lives or freedom.

Isaiah 45:1, 4-5
‘Second Isaiah’ was a prophet during the period of the exile of the Hebrews to Babylon. That captivity would come to an end in an unexpected way by the rise of Cyrus, king of Persia, whose rule was spreading through the region. He easily conquered Babylon and symbolically ‘took the hand of’ the god Baal-Marduk as part of the enthronement ritual of the Babylonian kings. The prophet’s view is that it is not the pagan king, but the Lord who stands behind these historical events. It is God who really takes Cyrus ‘by the hand’ and ‘calls him by name’, even if the king himself is not aware of this deeper truth. Second Isaiah sees this as God’s way of rescuing his chosen people, for Cyrus allowed the exiled Jews to return to the Holy Land. Because of this, the prophet boldly proclaims Cyrus as the ‘anointed’ – which in Hebrew is the word that comes down to us as ‘Messiah’ and it was never elsewhere used in the Old Testament for any non-Israelite king. God can work through the secular powers of the world, even when they seemed to be acting on their own will.

Second Isaiah stresses that redemption is God’s action and not by any other nations’ gods as well as rulers. There is only one true God, the only one with real power is a frequent theme in this book. Our translation ‘apart from me, all is nothing’ can also be phrased as ‘apart from me, there is no other’ – that is, no other god.

Psalm 95/96:1, 3-5, 7-10
The response also sees God as the true Lord, the hidden power behind what happens in history. The call to ‘give glory’ and ‘worship’ may be seen, in the light of the gospel selection, as what we should ‘give to God’.

1 Thessalonians 1:1-5
This is probably the earliest book of the New Testament written about 50 AD to early converts living in one of the large cities of the Roman Empire. An abbreviated account of St Paul’s preaching there is found in Acts 17:1-9. The tone of the book is largely joyful and with praise for the recipients for how eagerly they have followed their new way of life. The letter is an example of St Paul’s adaptation of the common letter style of the period, which first identifies the writer, then send wishes or favour from the gods. Paul instead will speak of our God, Jesus and the Spirit, with thanksgiving and blessings. Here he associates in his greeting the two who worked with him in his mission in Thessalonica. It is his first linking of three basic virtues – faith, love/charity and hope – as Paul describes how these are displayed in the lives of a Christian. The words could also be translated ‘shown your faith in action, your labours prompted of love, and steadfastness [or perseverance] in hope.’

Another point important to him is the power of the Holy Spirit, which was sometimes in the new churches shown in ‘charisms’ such as prophecy and praying in tongues, and Paul may be referring to that happening among these converts. but the essential point is that God’s Spirit is always with us whether shown or hidden.

Gospel Acclamation John:17-17
We do not have a ‘year’ dedicated to John but verses from that Gospel are used in the liturgy. This is a pairing of two frequent themes in John, the Word and ‘Truth’. For John ‘truth’ is more than acknowledging something to be factual – – the word is closer to our idea of ‘Reality’ or what is most deeply known. In this acclamation, we profess faith in both the ‘word’ of the text and Jesus as the ‘Word’. (See the opening of John’s Gospel for his presentation of Jesus as ‘the Word of God’.)

Matthew 22-15-21
Jesus was often challenged by the authorities in Jerusalem. The background to it is important to understanding this one. Rome had imposed direct rule in Judea in 6 AD, with a ‘poll tax’ to be paid by every one over the age of 12. This was so upsetting to the people of Israel that it sparked a revolt which was suppressed, but left them discontented with the taxation. Actively fighting against Rome was in Jesus time again urged by the Zealot party. Although people would pay the tax for their own safety, they would not respect someone who defended the power of the Romans. Yet if Jesus would speak out as against it, he could be denounced to the civil authorities. (In his parallel passage, Luke expressly points this out.) The ‘Herodians’ at this point are not easy to identify although likely include those who supported Herod Antipas who was Tetrarch of Galilee during Jesus time. His father Herod the Great had come to power by adopting Roman rule and benefiting from the power that gave him.

Thus those who came to Jesus used the two opposing views as a trap with either choice unsatisfactory. The questioners make a pretence of praising him and seeking an ‘objective opinion.’ Matthew lets us know right away that they want only to trick Jesus in this dilemma. Jesus lets them know he sees what they are trying to do. He asks for the coin that was required for the tax. This shows that the questioners themselves were using Caesar’s coinage. The picture on the denarius was the current emperor and the Latin inscription around his head was ‘Tiberius Caesar Augustus son of the divine Caesar’. On the reverse of the coin was ‘High Priest’. R. T. France comments, ‘the two titles together could hardly be more calculated to offend Jewish piety.’

Jesus short response indicates that they have for their own safety accepted the governing of the Romans, and therefore owe the tax payment. This is a civil matter and need not be seen as acknowledging Caesar’s claims to divinity and priesthood. But he does not leave it there: of more importance in Jesus’ teaching is to ‘give back’ to God. He does not spell out just what that would mean, but it might suggest acts of faith, worship and charity. In the previous parables, he has warned the leaders of their failure to accept God’s offer of the Kingdom made through Jesus, and here is a direct challenge to them to get their priorities straight.

While we may enjoy hearing how Jesus’ bests his opponents, are might we also be challenged the reflect on how well we ‘give to God what is God’s’?