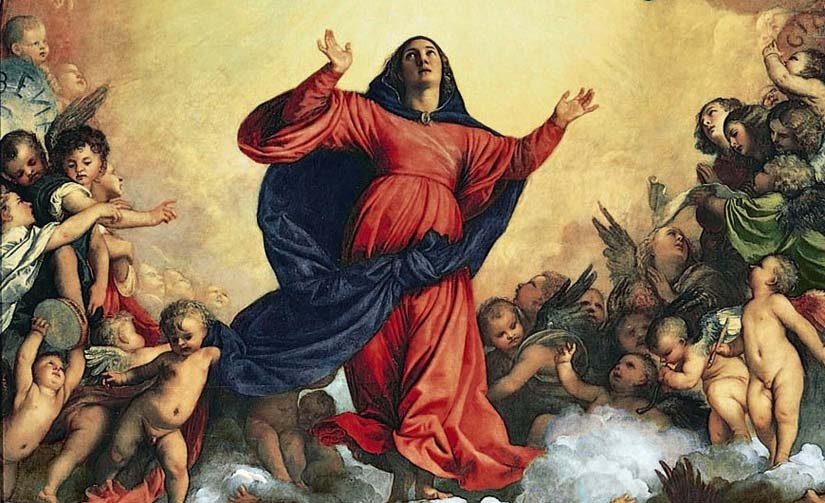 This feast replaces the 20th Sunday of Ordinary Time.

The raising of Mary into heaven, a singular privilege following the Resurrection of her son, is not mentioned in the New Testament, although the feast has long been celebrated in the Church. The liturgy draws on other texts for today’s mass.

The readings are available online here. (Scroll to the second set of readings)

Apocalypse/Revelation 11:19, 1-6, 10
This book is the most difficult one in the New Testament for readers today, because the literary form is unfamiliar. The words ‘Apocalypse’ and ‘Apocalyptic’ are, however, frequently used to describe the dangerous and world-upsetting events of our own times. The Greek word means ‘revelation’ and that title is used in some English translations. The style of ‘Apocalyptic’ flourished in the few centuries before and after Christ’s birth, and is found in the Old Testament in parts of the book of Daniel and this book in the New. An Apocalypse is written as if the author is reporting a vision of the future, but this is often a literary convention and the scenes are imaginary. The purpose is to support the readers’ faith that God is working in human suffering so that all will work out for their salvation in the end. (Compare Romans 8:28.) Apocalyptic imagery is often bizarre and hard to visualise. As a comparison to current styles, it is more like fantasy and the science fiction that project our concerns into the future

In today’s reading there are echoes of Daniel, such as the beast with seven heads. Some images are drawn from the pagan world, but given a new meaning for believers. Goddesses were sometimes shown with starry crowns, but Mary is seen in contrast at the service of the true God. The dragon with 7 heads and 10 horns would recall to those of that period the pictures of chaos and evil as a monster. The scene is depicted as symbolic, ignoring the historical details of Jesus’ birth.

The purpose of Apocalyptic is giving encouragement in times of danger and temptations to give up faith in a caring God who works with us through all the problems of present life. Roman persecution of Christians is a likely background for this last New Testament book. The persecutions written about Roman events, can still be seen as current experiences for those who are being martyred in our own times. The final words are the essential message: despite all this turmoil, the victory of God through Jesus will triumph, something we are all to trust in at all times. Many passages in the book offer comfort to Christians of all ages.

Christian artists have drawn from the section we read today for symbols of Mary and many paintings and statues show her with a crown of stars and a snake or dragon under her feet.

Psalm 44/45:10-12, 16
To find in pre-Christian psalms words suitable for Mary, the liturgy has chosen words about a queen, as fitting one now called ‘Queen of Heaven’. The words may also be seen as symbolic of the heavenly welcome for Mary as she is raised from death to join her son.

1 Corinthians 15:20-27
The second reading does not have a reference to Mary, but shows that the belief in her Assumption comes from Christ conquering death and leading all believers into a new, everlasting life.

Luke 1:39-56
Luke’s gospel gives the most, scriptural background about Mary, with stories that begin with the announcement to her of her choice as the mother of Jesus. This is linked to the stories of the birth of John the Baptist and today’s selection links the two birth predictions and the two births. Luke has told the story of the conception of John the Baptist to two pious believers who thought they were long past the time of child-bearing. Zechariah did not at first believe the angel who announced the birth to him, and Elizabeth in her greeting emphasises the difference with Mary, who did believe Gabriel who gave her a far more ‘unbelievable’ promise of a virginal conception.

In the two annunciation and birth stories, Luke is careful to point out that the superior role belongs to Jesus, as here the unborn baby John inside Elizabeth greets Jesus by ‘leaping’. Elizabeth receives the spirit of prophecy and recognises Mary as the one who will be the mother of Jesus her Lord, realising it is a unique privilege for Mary to visit her. She stresses two points, using two different Greek words, both here translated as ‘blessing/blessed. The first word – eulogia –praises God for what He has done in Mary’s motherhood. The second – makarios – is harder to put into English, basically ‘one who can be called happy’. The two reasons for Mary’s special recognition are that she will give birth to Jesus, and equally that she has believed God’s word.

Mary’s humility does not prevent her from seeing that she will be singled out as blessed by all coming generations. She knows that all is God’s doing, and not of her own. All she has and all that is offered to her is a gift of God. Luke will later tell us of the prophecy that her own heart will be pierced by the suffering of her son, and that too she accepts. That suffering forms another part of Catholic devotion to the Mother of God and our belief in her Assumption as the first one rewarded after Christ’s conquering of death.

Mary’s response is a psalm or hymn, which has traditionally been called from the first word in Latin the ‘Magnificat’. Rather than the traditional, ‘My soul magnifies the Lord’ which uses the term not common in English, our translation is better: ‘proclaims the greatness of the Lord’. Mary’s song is filled with echoes of the Old Testament, where there was a tradition of women singing in praise and thanksgiving. The song of Hannah, the mother of the prophet Samuel, has been noted as close to the ideas in Mary’s song (1Samuel 2:1-10). If Luke had access to Mary’s own words, it shows her as one who is familiar with the Hebrew Scripture and has seen its relationship to her own life. The hymn traces the coming of Jesus back to the promises made to Abraham at the foundation of the Jewish faith, which are now extended for all peoples

Mary’s hymn emphasizes God’s dealing with the lowly, the humble and powerless, looking forward to the time when their oppressors no longer triumph over them. Thus they are still a message for today’s world of inequality and poverty and tell us whose side God is on. Mary shares this concern for all those in need, and thus we celebrate her as a Mother who listens to us and prays for us today.