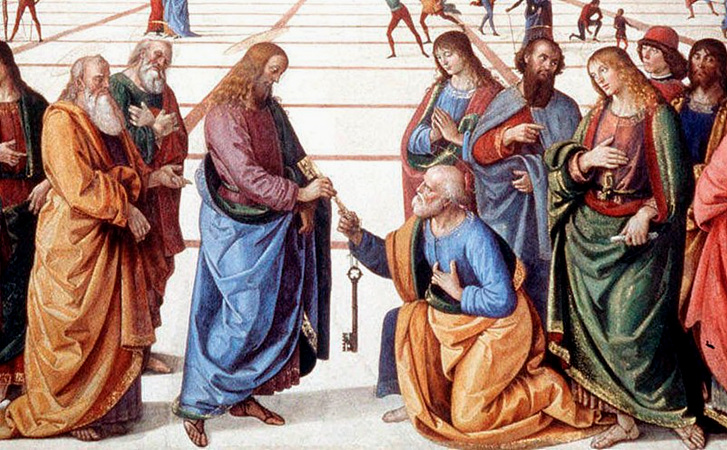 The Gospel has reached a turning point, for Jesus has finished his Galilean ministry. He now asks his disciples what they have learned about who he is. Jesus as the Christ, the ‘Messiah’, is something we so take for granted, it may take a little effort to understand the faith it required of the twelve assorted Galilean men. For Matthew, it is time of founding the Church.

Isaiah 22:19-23
This is the only other biblical text mentioning keys as a symbol of power, and so explains the image in the gospel. It is a stand-alone ‘oracle’ or short prophetic pronouncement without any context, but the story is clear enough. A steward of the palace of a Davidic king has been corrupt and is now replaced by Eliakim. It was a role of trust, which Shebna had abused for his own enrichment. The steward’s keys are often thought of as those that permit entry, and are behind the popular image of Peter as gatekeeper to heaven, often used in jokes and cartoons. R. T. France makes a different point which makes sense of Peter’s role. The keys of a large household are those to the storage areas, often of valuable items, and so relate the the management of the establishment for its proper functioning.

Psalm 137/138:1-3, 6, 8
This psalm is unusual in the liturgy as having no obvious connection to the previous reading. It is a good example of themes frequent in the psalms, the prayer book of Israel which became as well a prayer book for the Church. Many are thanksgiving songs as this selection opens, with various reasons given – in this one for just being listened to. Often they meditate on God’s nature and how he deals with his people, with ‘love, kindness and faithfulness which last forever’ being frequent and reflected here.

Romans 11:33-36
One again we have St Paul in a mood of exaltation, as he reflects on how we can never in this life know God in his fullness. (He will in another place say that when we reach heaven, ‘we shall know as we have been known.’) Paul sees all creation as coming from God and so everything we do is caught up in God’s being, his love. The odd phrase that ‘all is for him’ may mean we cannot ‘use’ or manipulate God (as pagan worship often tried to do) but that ‘we are made for God’ and find our own fulfilment in God.

Matthew 16:13-20
In one way, this section is straightforward and easy to follow; yet it is full of details that have the various commentators working overtime. One point is that it differs from Mark’s account (Mark 8:27-33) the words to Peter. Catholics and Protestants have differed in the interpretation of Peter’s role and whether it applies to all the successors as Catholics claim.

Caesarea Philippi was at the farthest northern boundary of the Jewish state, and neither Mark nor Matthew tell us why Jesus took his close disciples there. He has had, however, a final confrontation with the Galilean authorities, refusing to give them yet another ‘sign’. Then he warned his disciples not to follow their teaching and attitude (16:1-13). As stated at other times, he may again have wanted a retreat from the crowds with time for his disciples to reflect. The city of Caesarea Philippi was totally pagan, named for the emperor Augustus by the Tetrarch Philipp, one of the sons of Herod the Great, who ruled this area. It contained a pagan shrine where an abundant spring rose out of a deep rocky cave and was dedicated to the god Pan as king of the underworld. The gospels indicate Jesus did not enter the city, but was in the area. It is possible that the ‘gates of the underworld’ applied to the entrance to the cave as an image Jesus played on with his words to Peter, although the phrase is found in Isaiah 38:10 and so has a Hebrew background as well.

Now after his disciples have experienced the teaching and the miracles of Jesus, he questions them on what they have learned. His opening remark on what other people have said some see as the disciples having a closer knowledge from mingling with the crowd, but it could also be a way of getting them to engage with the question. The reactions varied, but in general all have seen Jesus as having a prophetic role like the great figures of their history, some it seems who were expected to re-appear, like Elijah. Jesus hints that this is not an adequate identification of who he is and why has has come and presses them for their own opinion – the Greek text gives emphasis to ‘But you, who do you say’, so he wants their own reaction. Only Peter answers; he is sometimes seen as a spokesman for all. In this case, however, Jesus’ response is personally addressed only to Peter and we do not hear of what the others would have said. These words are found only in Matthew. They have a poetic construction and some of the words Jesus uses have a background in the Aramaic language that was commonly used by Jews at that time. ‘Flesh and blood’ was a way of saying ‘human’ or ‘mortal’. The opening words indicate a solemn address: – ‘son of’ was an identification that would not be needed between friends unless a special point is being made. ‘Simon’ was his original name, and is used at times in the gospels, often joined to Peter. Only here do we learn where the ‘Peter’ comes from, but it is lost to us in most English translations. The Aramaic ‘Kephas’ or Cephas (used several times in St Paul’s writing in that form) was not a usual personal name, but the ordinary term for ‘rock’. Jesus gives Simon a new name and makes it work as a metaphor. The play on the words comes through in the Greek and Latin. Imperfectly but clearly enough: Petros and Petra. If our English was more accurate, we would say, ‘You are Rock and upon this rock…’ N. King’s translation is a rare one that says just that; but he bows to tradition and otherwise calls the apostle ‘Peter’.

The word translated in our reading ‘Church’ is ekklesia in the Greek text – the source of our adjective ‘ecclesiastical’. It was used in the Greek bible to translate the Hebrew word for ‘assembly’ for when the Jews gathered as God’s people. In the New Testament it is found only in Matthew, here and in chapter 18. Our word ‘church’ is used in various ways – including a building or the human structures of authority. In these words of Jesus, it is better to think of it as a new community, the people who are gathered together as the followers of Jesus. Building on rock as a strong foundation or ‘cornerstone’ has a long history, it appears in Psalm 118/119 which Jesus quotes about his own ministry. (See Matthew 21:42, and parallels.) Because the words are in poetry rather than a strict definition, there is no conflict between Christ as the foundation, Peter as the one on whom Jesus’ authority would be expressed, nor between the comparison to a temple for the community who worships there.

The ‘gates of the underworld’: this translation is better than the traditional ‘hell’. The word in Greek is ‘Hades’ and reflects the Hebrew sheol – the shadowy existence imagined as after death, almost more a grave that an ‘afterlife’. So the promise is that death will not win over the church founded on Peter. It is not here ‘hell’ as the kingdom of Satan and no battle is suggested.

‘Binding and loosing’: these words are not in the Hebrew bible, although used by the rabbis for authoritative teaching. They most likely refer to discipline in the community, used again by Jesus for all the apostles (18:18). The words generally translated as in our reading: ‘will be bound/loosed in heaven’ are striking and many see it as a power almost breath-taking – God will ratify what Peter decides. France, however, notes that an unusual grammatical form is used in the Greek: the ‘future perfect passive’ – so that it would be in English ‘will have been bound’. ‘With the simple futures, Peter would take the initiative and heaven would follow. But with future perfects the impression is that when Peter makes his decision it will be found to have been already made in heaven, making him the faithful steward of God’s prior decision.’ This seems to me to accord well with The Catholic idea of ‘papal infallibility’. Similarly, prayer can be seen not as ‘changing God’s mind’ to answer our requests, but as bringing ourselves to accept the richness of God’s will when, as St Paul says, what God is doing is above our present understanding.