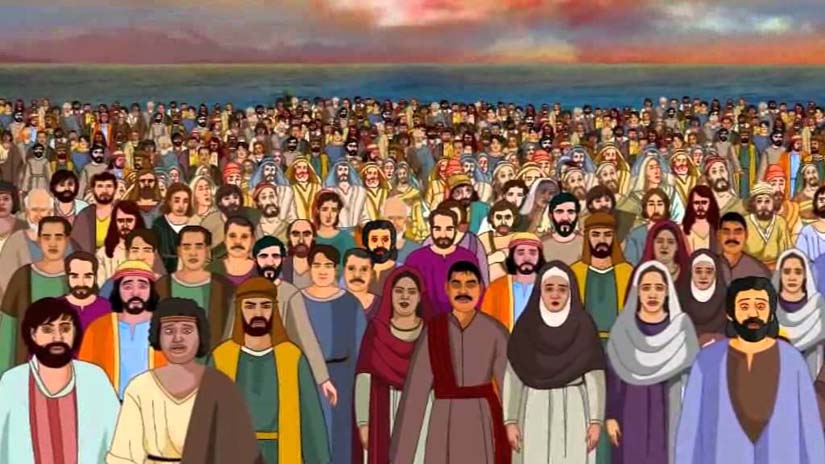 St Paul would never have heard of Covid-19, nor the disruption and divisions that it has brought to the world, but he well knew of other natural disasters, illnesses and social problems, and his words today are I imagine what he would be saying to us here and now as we face our particular challenges, both personal and for the various communities we are part of.

Isaiah 55:1-3
This prophet ‘Second Isaiah’, speaking at the time of the release from Babylon, knew of real hunger, thirst and such bodily needs, but the words today are metaphors for spiritual nourishment. The ‘Beatitudes’ in Matthew 5:1ff, commend those who ‘hunger and thirst for what is right’ and that is not far from the thought of the prophet. In the words following our reading, people are urged to do what is right, but also to trust in God ‘who is rich in forgiveness’ when we do fail.

In his notes in the Revised New Jerusalem Bible, Henry Warnsbrough OSB, explains the last verse about a new covenant, ‘No restoration of the monarchy is even hinted in Second Isaiah, rather the promises made to David are now spread to the community.’ In a similar way, Jesus did not establish himself on a throne in Israel, but offered his mercies to all, in a ‘new covenant’ in his words at the Last Supper.

Psalm 144/145:8-9, 15-18
This psalm is probably from the same late period as the first reading, quoting many lines from other psalms, all fitted into an acrostic of the Hebrew alphabet. The first verses are the most common descriptions of God, based on the revelation to Moses of loving compassion, forgiveness and faithfulness. The ideas and images are similar to Isaiah, and also lead well to the next reading.

Romans 8:35-39
We hear more this week from Paul’s letter. With some changes under our unusual masses now, you may not hear them read. I would suggest that on your own, be familiar with all of chapter 8 from this Letter, which is full of comfort and inspiration especially for those under trials of any kind. There is almost exuberance in this section as Paul tries to think of all sufferings, situations and forces that might make people feel helpless or discouraged. He lines them all up to prove that nothing whatsoever ‘can separate us from the love of God in Christ Jesus our Lord.’

Matthew 14:13-21
This is the only ‘miracle’ story told in all four gospels, with the minor variations we usually find as each evangelist drew from it the points they wanted to emphasise. Most of the commentaries see it as related to the Eucharist as it is described at the Last Supper, with the words of blessing spoken by Jesus over the bread. (I note, however, that this story is of bread and fish, with no wine.) A second meaning is often suggested, on the basis of some writings around the time of Jesus that the Messiah would bring back the miracle of the ‘manna’ that fed the Israelites in the desert wandering (Exodus 16).

For me, Matthew relates it first as showing the compassion Jesus had for all people. Secondly it showed the divine power Jesus had in service of that compassion. It would relate to the manna miracle as that showed God’s care for the people, and the power to see they were fed. Matthew in the opening and ending of his Gospel, see Jesus as ‘God-with-us’, and this is an example of how that played out in his life.

For Matthew, the story begins when Jesus heard of the death of John the Baptist (told in 14:3-12) which suggests he wanted to have a time of mourning with his closest disciples (though their presence is not noted till later.) When ‘crowds’ follow them, he puts their needs first. In Mark, he teaches them, in Matthew heals those in need, Luke has both. The disciples, though not named here, seem to be an inner circle like those he had sent on a mission trip earlier (10:1ff). (Mark and Luke make this clearer, as they set this account after the return of these missioners.) They too have some of Jesus’ compassion for the crowd, but the only solution they see is to send them off to find their own food. Jesus who had given them power on their mission, now tells them they too have power to help now, and he begins with the little they have to offer: five loaves of bread and two fish.

Jesus now says the prayer that was (and still is) spoken by a Jewish father at the family meal, praising and thanking God. (‘Blessed are you, Lord God of heaven and earth, through your goodness we have this bread.’) In that he may be showing that his followers will be a new family, a relationship he made clear before (12:49-50). The words had also been taken into our masses.

It is the disciples who now feed the crowd with the bread which has become more than enough for anyone there. How this worked is not described in any of the four gospels, so we are left to our own imagination. But all four indicate how many pieces were left when the people had finished eating, and this shows there was plenty for all.

The number of 5,000 men and the far more ‘women and children’ which Matthew stresses, is probably not to be taken literally. It is evident from other texts of that era, that both biblical and classical writers used such exaggerated estimates as a matter of course.

The account can be seen as a lesson in trusting God, but also we may see that disciples of Christ have the role of feeding others in need of care.