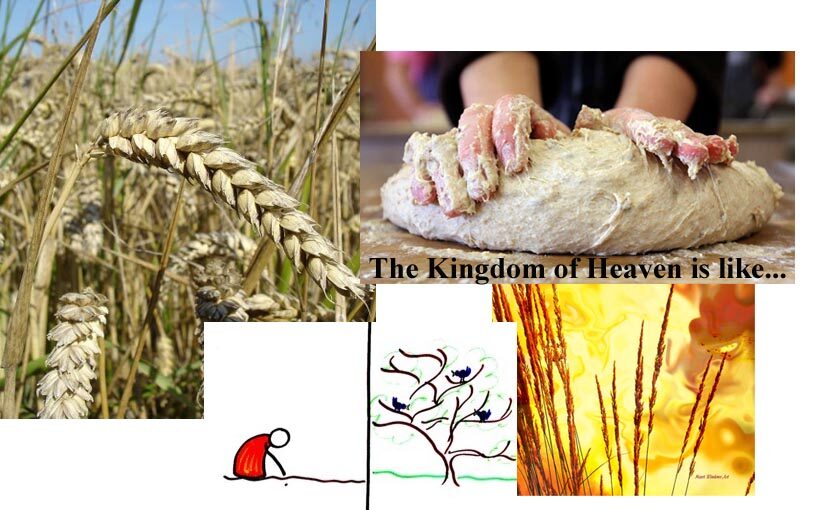 For these times of continuing uncertainty, St Paul in the first reading shows how powerfully the Holy Spirit works in us whether we ‘feel’ that presence or not. The Gospel images of ‘seed’ and ‘yeast’ remind also that only a small amount of faith will be enough to grow in power. Patience while God is at work in us is a gift to look for in a time of enforced waiting.

Wisdom 12:13, 16-19
This book, known to us only in the Greek version, was probably written in the last half of the century before Christ somewhere in the Roman Empire outside Jerusalem. (It may be omitted in Protestant Bibles which accept only the Hebrew canon.) While clearly in the Jewish Wisdom tradition like Proverbs and Ecclesiastes, it blends this with current Greek ideas. The author is unknown, and follows the old tradition of attributing all Wisdom books to Solomon. This passage is addressed to God – which may not be immediately clear as it is an excerpt of a longer section reflecting on God’s nature and activity. The author emphasises the idea that God’s power is never oppressive because it is combined with mercy. From that he draws a lesson for how we are to behave with other humans in a kind and loving manner.

Psalm 85/86:5-6, 9-10, 15-16
This psalm has a number of theme common in the Old Testament, the summary of God as ‘faithfulness and compassion’ became a refrain. The form of the psalm is a prayer in need, but is based on the psalmist’s trust in God as merciful and forgiving. The second set of verses, speaking of ‘all nations’, looks toward the image of the mustard tree in the gospel.

Romans 8:26:27
This short reading follows on from last week’s, and is also like a ‘mystical vision’ of St Paul rather than a logical explanation. Chapter 8 of the Letter is about living in the Holy Spirit and the power it brings into our lives. Paul often urges prayer, but here he recognizes problems of trust that may arise. This translation of the Greek is not exact. The lines, ‘cannot choose words’ is more accurately ‘we cannot pray as we ought to’. The idea of the Spirit, who ‘intercedes in sighs too deep for words’ is left out. The word ‘sighs’ in other translations is ‘groanings’. This word in Greek is used in the New Testament indicates a strong emotion, and is striking for the idea that the Holy Spirit shares our deepest feelings.

Faced with a complex situation in our lives or in the world around us, people may be unsure of what to ask for. Paul says all this does not matter because the Spirit leads us into the long-term providence of God. The Lord not only sees the final end but is here and now with us in our confusion and suffering. The Spirit’s prayer within us thus unites us with God’s loving compassion, as spoken of in the Psalm.

Matthew 13:24-43, or 13:24-30
More today from the chapter of parables. The priest may choose to read the shorter version. The first one of the weeds sown among the wheat is found only in Matthew, as is the explanation at the end dealing in more detail with the image of weeds. The two parts are separated by parables also found in Mark and Luke. Matthew also adds a second note on why Jesus used parables to teach, finding a quotation from the Psalm 78/79:2 to show how Christ followed the practice of the prophets. It is characteristic of this Gospel to cite Old Testament verses that bear some relation to what is said by Jesus. These give a sense God acting over long periods of time, and suggest the full meaning of what is happening is not always clear to those living through it. It also stresses that we are part of a vast community of believers, past and present.

There are similarities in these parables, all of which aim to show what the Kingdom of Heaven is like, most stressing that growth may come slowly and therefore this calls for patience. The tiny size of the mustard seed was proverbial, and in the fertile soil of Galilee the plant could reach up to six feet. Our translation calls it ‘the largest of shrubs’ although the Greek is the usual word for ‘tree’ and that exaggeration actually works well to describe abundance. It tells us that the final result is surprising and well worth waiting for.

In the book of Daniel 4:12, 21, Nebuchadnezzar has a dream in which the empire of that time is pictured as a tree sheltering many birds. This is interpreted by the prophet as meaning all the nations of the world at that time. Those listening to Jesus who knew the scriptures, would pick up the hint that the Kingdom of Heaven will be offered to the whole world. The parable in its simple form would offer assurance to the disciples that in due time the teaching they themselves have accepted and are to proclaim, will spread out far into the borders of the Roman empire they lived under. And we know now it would eventually go to continents unknown to them at that time.

A second lesson of slow growth from small beginnings is the parable of the leaven. Here there is an exaggeration in the amount of flour, which ‘was enough to feed a small village’ (R. T. France) rather than a ‘homely loaf’ for a family. (It is reported that in lockdown time many people have been making homemade bread, so this parable may have new relevance for some!) The process was like present ‘sour dough’ breads: to save a small amount of naturally fermented dough and mix it with flour and water in which the live culture would be able to grow. Added to more flour, the whole mixture would slowly rise till ready to bake. This requires patience while the leaven works, as those now baking their own loaves will have learned. Jesus use of the picture of a woman cooking at home shows his observations of everyday life. We could imagine him watching his mother as she prepared family food. The large quantity here may be taken as a reminder that abundance is to be shared with any in need.

‘Darnel’ in our translation is a rare word now, and the plant is not common here, so I appreciated the lengthy explanation in France’s commentary. The grass Lolium temulentum is a type of rye that in early stages does resemble wheat, but later show black stems and small heads of poisonous grain and so can be identified and destroyed. The idea of an enemy sowing the seeds secretly sounds odd now, but there was at that time a Roman law against that so the listeners would have found this idea familiar and would recognise the dangers. The point of the parable in its simplicity would encourage the early Christians who were upset by problem people in their communities and wanting to expel them. There has often been throughout history, the same temptation to want to belong to a completely ‘pure’ religious group and not have to live with those who disagree as well as those who are troublesome or embarrassing. Patience is again needed to understand that God will deal with them in God’s own time – made explicit in the fuller explanation as the ‘last days’.

The burning of the darnel after the harvest may suggest ‘the fires of hell’ as commonly thought of. Yet in the Old Testament, fire was often a symbol of purification – ‘as gold is refined in a furnace’ is a common comparison. So it would fit the Catholic belief in ‘Purgatory’ as a cleansing from the remaining effects of sinfulness before coming into the full radiance of God’s presence. This also fits the reminder of the Wisdom reading: God is always ready to forgive those who turn to him, no matter how terrible their sinfulness has been.

As with last week’s parable explanation, the final verses fit the conditions of the early Church. There are a number of expressions that are typical of Matthew’s writing – like ‘the end of the age’ – which show that he took the tradition he was familiar with, then expanded the simple point of Jesus’ original parable to fit the community around him.

This process of learning from the past to deal with the present is seen throughout the Bible and a reminder that we are to do the same – ‘reading the signs of the time’ and acting appropriately. I have been aware of 2020 as a time of world-wide turbulence when people are challenged to trust the presence of God and find new ways to respond to what is ‘unprecedented’.