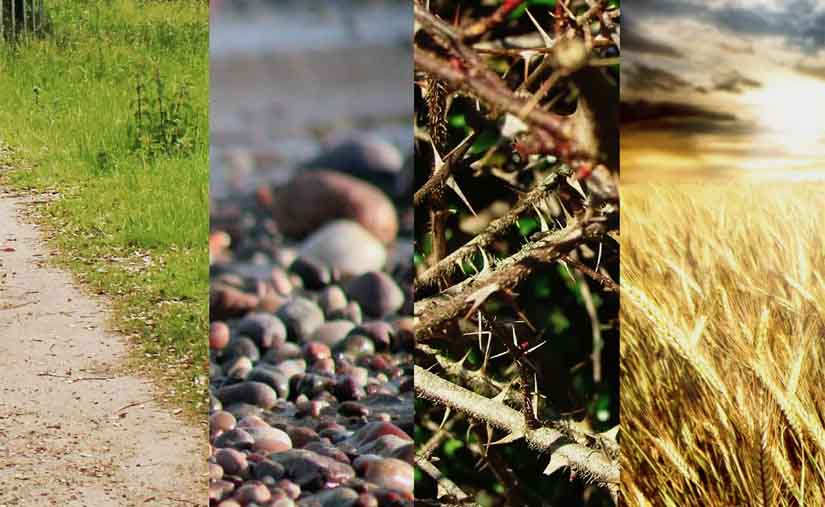 During this recent time when churches were closed, the press reported that a lot of people said they were praying more than they used to. It has been noted before that suffering or present danger makes people recognise how helpless we really are, dependent on God for all we have. Things we may have taken for granted – like attending Sunday mass – are shown to be precarious. Yet God has always been there for us, as today’s readings point out, and will always be with us in love and care.

Isaiah 55:10-11
This short reading is from the anonymous prophet, often called ‘Second Isaiah’, whose words were collected in the book which began with Isaiah of Jerusalem, In the usual poetic style of this writer, we have a comparison of rain which is so important to people who lived to farm in dry lands and are so dependent on good weather. As is typical of Hebrew thinking, ‘God’s ‘word’ is not just a ‘message’ and more of an act.

The whole of chapter 55 is full of assurances of God’s love and is good to read in times of discouragement or crisis. Our selection emphasises God’s caring intent with the image of God working through nature. The verses today would have been known to Jesus and familiar to the first listeners when they listened to his parable in today’s Gospel.

Psalm 64/65:10-14
The psalm response has a similar theme of the growth of the earth’s plants seen as a blessing for human life. Its mood is one of joy and celebration of God’s care for all.

Romans 8:18-23
This chapter is one of the richest in St Paul’s Letter, and our selection suggests a mystical experience that revealed the mysterious way God works through all creation as well as with human life. As in most writing trying to describe experiences of the transcendent, Paul’s logic is not always clear as he deals with what is hard to put into ordinary words. Paul has recognized that for those believing in Christ and filled with the Holy Spirit, there are questions about living through difficult or dangerous times before they see the fullness of their redemption and God coming in glory.

The words ‘first fruits’ is an image from the Old Testament sacrifice practices. These were the first of the harvested crops which were offered in the Temple to God as a sign that acknowledged God as the giver of all growth. Christians of his time were the first who accepted Christ’s words of salvation and showed Jesus’ salvation in their lives. While human suffering is obvious to us now as it was then for the Romans, Paul also sees in the non-human world the same evidence of pain from a lack of perfection. He uses a comparison with a woman in labour whose pain will be seen as ‘worth it’ as it results in new life. For Paul the new kind of life will be a whole new creation in which the physical world has a part along with the spiritual.

Matthew 13:1-23 [or 1-9]
This is one of the Gospel’s chapters of Jesus’ teaching that Matthew groups as if one speech. This one echoes the chapter of parables in Mark 4. In Matthew’s arrangement, this story comes after Jesus experienced rejection from the leaders of the time and even some in his own family.

The Greek word, which is the root of our ‘parable’ was used to translate the Hebrew word mashal which has a variety of meanings, from the longer stories we today call parables down to short images and even riddles. In the gospels the range of meaning is smaller but includes dramas like Luke’s parable of the ‘Prodigal Son’ and short comparisons of one or two sentences. In today’s selection we see two different ways a parable can work. The first is a simple story, almost always based on experiences of everyday life at that time. This is followed by a more elaborate or allegorical explanation when the story changes from the emphasis on the sower to focus on the seeds.

My interpretation of the simple form differs from other commentators. Most try to figure out why the sower spreads the seeds so widely and suggest there must have been different agricultural practices at that time. Instead, I would say that Jesus and his listeners knew the normal practices of farming and immediately recognise that the sower acts in a most unusual fashion, in fact foolishly! In a place where rain was unreliable and the harvest uncertain, great care would be taken in the planting. The listeners would have been surprised, and probably amused, at the carelessness of this farmer, who scatters the seed everywhere beyond the ploughed fields where it can’t possibly take root and grow to harvest time. A parable like this often ends with a startling conclusion, and Jesus says that despite the seeming carelessness there is a huge harvest, well beyond normal expectation. The puzzled hearer is invited to reflect more deeply on what that means.

Then the point of the parable becomes how God acts, lavishly sending his love, reaching out to all the people – even the most uncaring, the wicked and those who refuse to hear him. This is not the usual view (then and now) that it is good and worthy people who will be rewarded as they expect. Instead the opening of God’s Kingdom is also to the most sinful and wayward. Other parables of Jesus in the gospels show this same great generosity of God, his continued willingness to save.

In telling this simple story and inviting everyone to think about it, Jesus subtly identifies himself with this kind of God. Despite how many have rejected him, Jesus has not given up, but calls to all the crowd: ‘Listen, all who have ears!’ This has a sense of urgency: ‘I am offering you something you need to attend to!’ If our mass reading stops here, we will be like the first listeners who are invited to see Jesus as one who offers himself freely to everyone.

The longer version brings in a dialogue with the disciples. They are puzzled that Jesus speaks in stories that are tricky to understand. Jesus’ answer has left commentators also puzzled as his words seem to indicate he does not intend the listeners to understand, despite having just called on all who hear to appreciate the parable! Mark alludes to the wording in Isaiah but Matthew, as is his practice, quotes it extensively. It is the condition of the people whose hearts have ‘grown dull’ or unresponsive that they don’t hear the message, rather than God’s intent that they not respond. The last words I take as heavily ironic: if all had listened and turned to God they would have been healed, for God always wants to heal. Matthew, writing after so many Jews of his time had rejected Christ, sees how the words of the earlier prophet had proved true not only for Jesus’ time but also in his own days.

Matthew concludes with Jesus speaking a blessing on those who do listen along with a reminder of how many generations had longed for the Messiah and would have rejoiced in his presence.

We look in the scriptures for ideas that speak to our own needs and experiences. The same differences in responding to the call of God are seen in the church and the world around us. And also in our personal lives as we hear the scriptures and respond in different ways. In hard times, we may need the assurance that God’s word and healing are still poured like the rains of Isaiah’s prophecy.