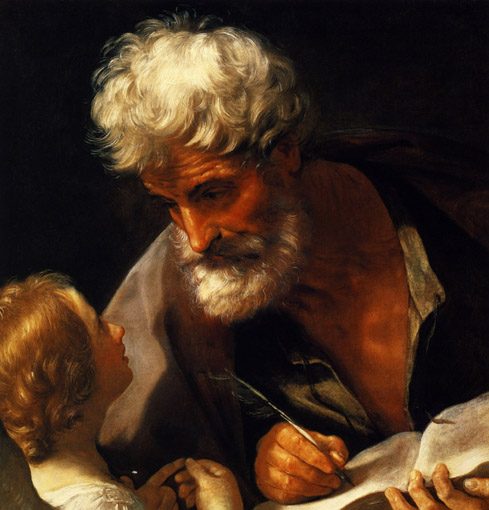 A Lenten practice that will have lasting value in life is to find time daily or weekly to read something from the Bible. In Year A, Matthew is a good place to start. As we read any scripture, we are not just getting information as we would with a history book. We are encountering God, and in the four gospels our Lord Jesus Christ. We hear his words and see him in action. By placing ourselves in a prayerful mood ready for a personal relationship, we share something of the experience of the first disciples. Like them, we will be taught how to live – also challenged, comforted, strengthened. From the story of Jesus birth, Matthew tells us he is ‘God-with-us’ and the last words of the Gospel are ‘I am will you always till the end of time’. With Matthew, we can choose to ‘be with’ God and with others as disciples of Jesus Christ.

This gospel is the first book in the New Testament as we find it now. Despite that, it is not the earliest book written – the priority goes to some of the Letters of St Paul. None of the gospels names their author, early tradition give the ones we use. We can guess something about writers from their books. Many modern scholars think that Mark was written first of the four gospels and was used by Matthew as a source and rather as an outline, and this makes a lot of sense as one works with the books. Some sections are the same, word-for-word, but we also can see Matthew ‘correct’ Mark’s rough Greek grammar, add a few clarifying notes or reduce details he is less interested in, and to stress the dignity of Jesus. When he narrates a story, it may be less vivid than Mark. (Compare Mark 5:1-20 to Matthew 8:28-34.) Despite these shortened sections, Matthew is considerably longer because he puts in five sections of Jesus’ teaching, and also more parables and two chapters telling of his birth.

Matthew and Luke also share some material that is not in Mark but no written record has been found for these passages, which are mostly sayings, and appear in differing parts in the two gospels. (For these shared texts, you may find the designation ‘Q’ from the Germany word for ‘source’.) We can observe Matthew’s care in arranging material, in seeming to have in memory much from the Old Testament, and the importance given to the disciples and how they are to live as followers of Jesus.

Matthew is said to be the ‘most Jewish’ of all four gospels, even in the language. Where Luke and Mark, for example, have ‘Kingdom of God’, Matthew usually has ‘Kingdom of Heaven’, a Semitic way of avoiding as much as possible using the name of God. All four gospels show how the Old Testament foreshadowed Jesus, but Matthew has more direct quotations, ten of them using the formula, ‘This happened to fulfil the words….’ While noting the continuity of Jesus to the past, the book also stresses that in Jesus there is something entirely new and unexpected. This starts with the opening of the Gospel in which Matthew gives Jesus a legal Jewish descent though Joseph from David and Abraham and then comes a break with the past: Mary is with child by the power of the Holy Spirit and not a human father.

Matthew shows Jesus using a rabbinical style of debate when talking to other Jews. In his commentary on the gospel, Daniel J. Harrington suggests that Matthew was in a struggle with the followers of the Pharisees to be the rightful successors to the faith of the Old Testament. This means sections that are less interesting in our time or even sound ‘anti-Semitic’. Matthew stresses lasting parts of the Jewish Law while noting that Jesus made significant changes. ‘You have heard it said… but I say to you…’ is used a number of times in Matthew 5:17-48. Gentiles, however, play an important part in this gospel, from the visit of the Magi on to the last words of Jesus sending his followers out through all the world. Harrington thinks that Matthew worked in a mixed community of converted Jews and Gentiles and so had both in mind as he wrote.

Matthew makes a point of noting geographic locations of Jesus ministry, often tying them to an Old Testament prophecy, as Galilee in 4:12-16. This gives them symbolic value. ‘The mountain’ is frequent but not given a name, again it likely has some symbolic overtones. Some are from the Old Testament where mountains real and imagined are found in various books. Because the city of Jerusalem was built on a mountain, called Mount Zion, that features especially in psalms. As a general rule, we can take it that the events said to be on a mountain is a way of indicating what is happens or is said there is important for the disciples – and therefore including us.

Matthew takes a special interest in St Peter. Although he recounts Jesus rebuking him (16:21-23) and the denial during the Passion as does Mark, this is the only gospel with the ‘commission’ that on Peter Jesus will ‘build his church’ (16:16-19). Matthew is also the only one of the four to use the word ‘church’.

A major feature of the gospel are the five blocks of Jesus’ teaching, and these instructions for living as a disciple made it a favourite in the early church. The best known of the five is ‘The Sermon on the Mount’ which takes up three chapters. In it Matthew gives us our usual version of the ‘Our Father’ (‘The Lord’s Prayer’) and the ‘Beatitudes’ (5:1-10). Only in this gospel is the Last Judgement (25:31ff) which has inspired so much Christian art. Although punishment for sin is part of Matthew’s faith, the parable of the Last Judgement is far more about how Jesus identifies himself with all those in need to the point where anything done for them is done for Jesus himself.

Throughout the gospel, we see Matthew’s concern with the preparation of the disciples. This appears early, for immediately after Jesus starts to proclaim the coming of the Kingdom of Heaven, he calls the first disciples (4:18-22) and right after this, he begins his teaching to them. Although the instructions were historically spoken to those around Jesus, most of these apply to our own lives.

The presence of Jesus among his disciples – even after his death – is an important point for Matthew. He is the one who records Jesus saying, ‘When two or three are gathered in my name, I am there with them.’ (18:20) Reading Matthew alone or together can also put us in that presence. With each reading, one goes deeper into that loving relationship. Also memorising key texts brings it into everyday life. ‘Happy are those who hear the word of God and keep it!’

There is background material on the website to those portions of the Gospel read at mass, but those who want more serious study, there are a number of ‘commentaries’ at all levels of scholarship from Catholic stores and online. Some bibles have short but helpful notes.